Urgent message: Taking your business from stagnant to successful is not an easy task, but it can be done with the right team, a creative approach, and laser focus on your core functions.

The situation was fragile: Disappointing financial results, low morale, high turnover, leadership in transition, and an uncertain future. Things needed to change, and they needed to change quickly. But there were no quick levers to pull, no big savings to realize through nonoperational changes. If the organization was going to turn around, it would require everyone who was there and some new faces to make it happen. But, how do you get a group of people moving in the right direction—and fast?

This was the challenge we faced in the Urgent Care Operations group at Adventist HealthCare in 2016. Here, we explore how Adventist turned things around, and offer lessons learned in the process.

RIGHTING THE SHIP: A CASE STUDY

The urgent care operation needed to serve three important functions to accomplish the organization’s mission: It had to give excellent outpatient care; it had to help patients learn about our system and trust us with other aspects of their care at other entities; and it had to be financially sustainable.

To simplify that value proposition so that everyone could know where the entity needed to go and help us get there, we simplified it as POP!, which stands for: pipeline, outstanding care, and positive Margin. Bringing POP! to the staff required a sustained and disciplined campaign to build a deliberate culture that would be the foundation of accomplishing our goals. We launched that campaign to empower the staff to bring what POP stood for to life all day—every day—every patient.

FOCUS: Does It POP!?

Stephen Covey is credited with the concept to “keep the main thing the main thing.” For urgent care, POP! was our “main thing.” For many organizations, including for-profit, nonprofit, and government, mission creep and overdiversification are tempting. Disguised as opportunities or response to an urgent need, losing focus on the core mission and competencies of your organization can be devastating.

POP! functioned as a tool to keep the organization laser-focused on what needed to be done: fulfilling our core purpose (or “main thing”). As staff sought approval of proposals for new tools, services, or offerings, the question asked of them was always, Does it POP!? At first, the response amounted to nothing more than a confused stare. If their answer was No, then my answer would be correspondingly No, as well

It was vital that we were disciplined in doing work that “POP!ed” to achieve our goals. Everything else was not necessity but, “nice to have.” The goal was to remain focused and disciplined about achieving our goals.

We wanted staff to “reflect” on our objective to the extent that it would become a “reflex”— reflexion. By making POP! as present as possible in the centers, we encouraged staff to keep “where we are going” at the top of mind. In doing this, staff could be empowered to make decisions and use their own judgment on urgent tasks within the context of POP! In other words, we encouraged their “reflexion” to be, “Does what I am about to do POP!?”

More than just the framework, it had to be deployed in a way that kept it top of mind.

In addition to putting up signs in the centers that explained POP! in simple terms, we also deployed POP! baskets for the staff (see Figure 1). These care packages had food items that POP!ed, such as Pop-tarts, Tootsie Pops, Popcorn, Pop chips, Ring Pops—you get the idea—to which the staff could help themselves. 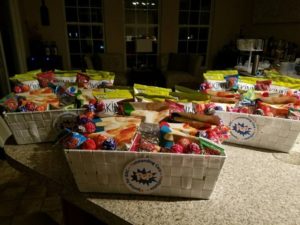 The team began speaking the language of POP! in emails and other correspondence. For example, “Team: For our centers to POP!, we must increase the number of patients we see every day. We do this by demonstrating outstanding care, which motivates our patients to give us positive online reviews.” Communicating that kind of alignment gives the staff a context by which to understand where leaders are coming from in presenting new initiatives and driving results.

To track our progress in achieving POP!, we created a daily dashboard that was both distributed to the entire staff via email and discussed in newly instituted daily team huddles. The dashboard was composed of seven metrics that we used to track whether we were achieving POP! goals and used a stoplight graphic (red, yellow, green) to allow staff to understand our performance on a daily basis.

Through these initiatives, staff had a consistent stream of communication about where the entity was going (POP!) and whether we were getting closer (daily dashboard).

To bring POP! to life, we deployed both formal and informal recognition to show appreciation for their hard work and to keep them motivated.

At daily huddles, I would present small tokens of appreciation to the staff members who were demonstrating behaviors that helped us POP! Sticking with the theme, I would purchase a Funko POP! figurine (see Figure 2) for a specific team member. In a public setting (usually at a huddle), I would speak about how that team member’s actions make us POP! and then give them the figurine as recognition.

More formally, the leadership team came up with a recognition program with a $100 monthly bonus attached to it. Team members nominated each other for the monthly award by filling out a form that asked how the nominee created a pipeline, delivered outstanding care, and helped generate a positive margin for the entity. Again, the idea was for the nominator to think in terms of POP! so the team was all working together in pursuit of a common goal and vision.

To be successful, and for POP! to “stick” with the staff, our leaders needed to be the most enthusiastic ambassadors. They needed to use the language of POP! while communicating with the staff and giving examples on a daily basis of how our work contributes to that overall vision.

In addition to coaching via weekly one-on-one meetings and taking and sharing the results of our DISC assessments (which gauge personality types based on tendencies for dominance, inducement, submission, and compliance), the leadership team read several relevant articles and books together and discussed them in weekly leadership meetings. These outside readings helped us not only learn from authors, but helped us take ideas and make them our own to bring POP! to life.

Discussion of our first book, for example, inspired a new approach to team-member selection and a plan to deploy it. Under the new selection criteria and “leadership system,” which included a new, daylong, urgent care-specific orientation, as well as a plan for engagement and leadership development, we dramatically reduced employee turnover.

From that discussion also came months of work to put together an urgent care “Credo Card,” (see Figure 2 again, next to the Funko POP! figurine). We solicited feedback from staff at all three locations over the course of 5 months of facilitated discussion. We asked the staff how we bring our organizational values of Respect, Integrity, Service, Excellence, and Stewardship to life every day in our centers. We synthesized the comments into a card that staff must carry with them at all times.

One panel of the cards is reviewed at every staff huddle, every day, to keep those behaviors top-of-mind. The card has become a part of the team’s identity as an entity, and they proudly wear them on their name badges.

RESULTS: The Path to POP!

While the work to ultimately meeting all the objectives continues, within the first 12 months the team made significant progress:

KISS is short for, “Keep it simple, stupid,” and it is some of the best advice I have ever come across. By aligning our work under the ongoing theme of POP!, everyone could understand it and get on board. It wasn’t complicated or confusing or business-speak. It was just simple and easy for our audience (the whole team) to understand.

By creating a simple and easy-to-understand direction and consistently reinforcing it through many different avenues, leaders can inspire and empower the whole team to partner with them to achieve shared goals. Create a clear focus, align systems, processes and behaviors and then make it happen!

POP or Drop: The Direction Your Urgent Care Operation Goes Is Up to You
Share this !