Urgent message: Convenient, quality, same-day care is one of the hallmarks of the urgent care setting. Many operators have moved to offer preregistration to speed visits along, but the question of whether an online appointment system would be effective in further improving efficiency in visits has not been studied previously.

Introduction
The aim of our study was to evaluate how the implementation of an online appointment scheduling system would affect wait times and throughput in our urgent care facility. We hypothesized that implementing an online appointment scheduling system at our urgent care clinic would reduce the variability of arrival times, reduce the initial surge at opening, and decrease the arrival-to-bed and arrival-to-doctor times.

Background
There has been a significant surge in the number of urgent care centers in the United States. At the end of 2016, the Urgent Care Association of America (recently renamed the Urgent Care Association) counted 7,357 registered centers.1 Some estimates put the number higher. These centers report an average of nearly 12,000 patient visits yearly.1 Current estimates are that 13.7%–27.1% of emergency room visits could be managed in an urgent care setting.2 Hospitals and healthcare systems have also become key players in this space, as 15% of urgent care centers are hospital-owned, and another 16% are in joint ventures with other private entities.1

Our own healthcare system has two urgent care centers. These centers have provided significantly shorter wait times and lower costs of care compared with the emergency room. However, there have been some workflow challenges associated with sporadic patient arrivals.

Appointment scheduling systems have been proven successful in the management of access to service providers in primary care and specialty clinics.4,5 However, these programs have not been widely implemented in the urgent/acute care setting. We hypothesized that implementing one such tool in our practice would improve the flow of patients through the system.

Materials and Methods
Our research was designed as a retrospective observational study. We collected data on individual arrival times and arrival-to-bed and to-doctor times on all visits to our urgent care facility over the course of a year. The data was separated into the 6 months prior to and the 6 months after the implementation of the online scheduling tool (OST). The 6-month period prior to implementation of our OST was June–November 2015. The 6-month period postintervention was January–June 2016. We visually analyzed the data and assume wait times longer than 600 minutes were erroneous, considering the clinic was only open for 600 minutes. This accounted for less than 1% of data.

We tested differences in variances using a robust test for equality of variances for significance and used the difference between the interquartile ranges (IQRs) to get the percent change (due to the non-normal distribution of data) between the pre- and postintervention time periods. We used Wilcoxon rank-sum to compare percentage differences and the wait times during the pre- and postintervention periods. All statistical calculations were performed in Stata version 14 (College Station, TX, StataCorp LP, USA). 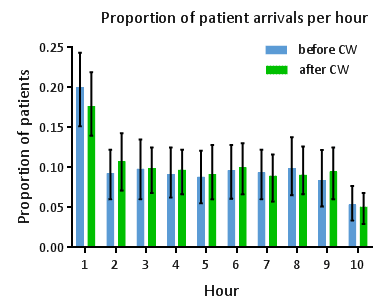 We also observed reductions in the percentage of patients waiting to be roomed at every 15-minute increment after clinic opening. The reductions were statistically significant within the first 15 minutes in wait times to be roomed (p<0.001) (Figure 2), and significant after the first 30 minutes in the wait times to be seen by a doctor (p<0.001) (Figure 3). Specifically, at the 1-hour mark, our intervention reduced the number of people waiting to be roomed from 10.18% to 6.65% (a 35% relative reduction), and the number of people waiting to be seen from 22.21% to 14.82% (a 33% relative reduction) (both p values <0.001). 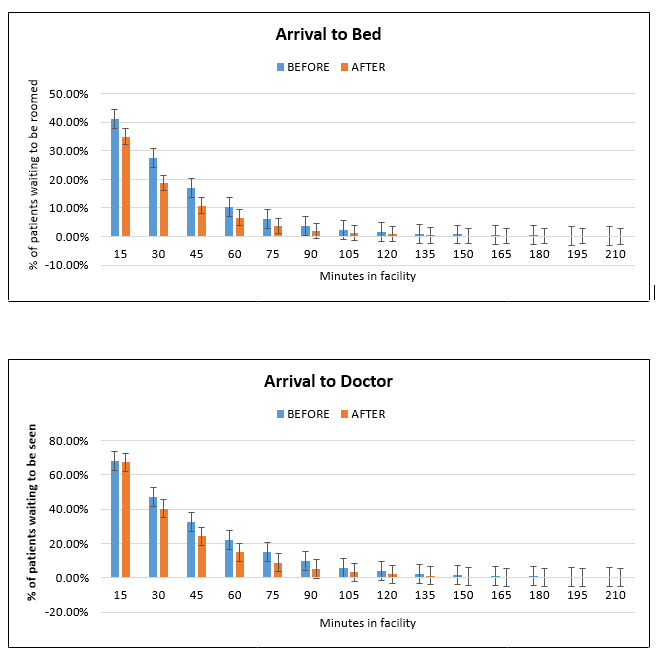 Discussion
Many Americans seek nonemergency care in emergency departments. Current estimates are that 13.7%–27.1% of all emergency department visits could be managed adequately at alternative sites.2 Urgent care clinics provide patients with more flexibility for when to be seen and have shorter wait times compared to emergency rooms. Urgent care clinics are advantageous to health systems because they reduce the overall costs of delivering care3 and enhance a system’s ability to increase access to care for its patient population.

The implementation of an online appointment scheduling system at our urgent care operation reduced the variation in patient arrival time, particularly during the first hour, and time between arrival-to-bed, and to-doctor. Our intervention also led to significant reductions in the number of patients waiting to be seen and roomed. Although there is only a 3.75% reduction in the variance of all number of patients seen per hour, this observation follows a well-studied concept in the modeling of queuing systems; small reductions in variance can significantly improve flow through a system. Additionally, only 37.5% of patients seen in the implementation period used our online scheduling tools for their appointments. This was achieved without much advertising. We anticipate that increasing this number would further improve the patient throughput in our system.

Limitations
Our study had important limitations that merit attention. Of central concern is that this is a single-system, single-center study; thus, it is difficult to draw parallels as to what results might be expected if used at a different center. In addition, an interesting data point that was missing from this study was staff satisfaction scores. We received anecdotal praise of the new system but were unable to quantify it. Finally, it is difficult to make any conclusions about whether the gains are retained over time, as these are influenced by the usage of the appointment system and changes in variability.

Conclusion
The implementation of an online appointment scheduling system at in an urgent care center resulted in a reduction in the variation in patient arrival time, particularly during the first hour, and time between arrival to bed, and to doctor. We were also able to show significant reductions in the number of patients waiting to be seen in rooms at different time intervals. The time differences are significant, but modest, and require further study.