Urgent message: Abdominal pain is an extremely common complaint in the urgent care setting. The differential diagnosis of abdominal pain is often a challenge, however, because many symptoms and signs are nonspecific. Ovarian torsion usually presents with sudden onset of severe, unilateral lower abdominal pain, associated with nausea and vomiting; however, in a small percentage of cases, the clinical course is prolonged, as the torsion can be intermittent. While failure to consider ovarian torsion in the differential diagnosis is not uncommon, given its relatively low occurrence, timely diagnosis is of paramount importance to prevent necrosis and preserve ovarian viability.

Introduction
Gynecological causes account for about 4% of all abdominal pain complaints seen in emergency departments. Of those, 3% of cases are attributed to ovarian torsion. Also referred to as adnexal torsion or tubo-ovarian torsion, ovarian torsion is the partial or complete rotation of the ovary and portion of the fallopian tube on the vascular and ligamentous structures, which results in limitation or complete cutoff of the blood supply to the ovary. The incidence of ovarian torsion is higher in younger women (15-30 years) and postmenopausal women. Approximately 20% of the cases occur during pregnancy. Risk factors for ovarian torsion include hypermobility of the ovary due to increased length of ovarian ligaments (<50%); enlarged corpus luteum in pregnancy; and the presence of ovarian masses/cysts (50%-60%), with masses between 5 and 10 cm causing the highest risk for torsion.1-4

Presentation
A 32-year-old woman presented to our walk-in clinic with intermittent, progressively worsening left lower abdominal pain for 3 days. The patient stated that she had self-medicated at home with PCP and cocaine without relief of pain. Patient reported occasional episodes of nausea and vomiting; no diarrhea, constipation, fever/chills, dysuria/urinary frequency. The patient stated that it was becoming difficult for her to walk and stand up straight due to worsening pain in the left lower quadrant.
On physical exam, the patient looked in mild to moderate distress. In addition, we found:

The patient was transferred to the emergency department where a CT abdomen and pelvis with contrast was immediately requested for further evaluation. Per the examining physician’s notes, the CT scan was read as: “Heterogeneous 6.9 cm round mass superior to the uterus. Given lack of visualization of the left ovary and reported acute onset of abdominal pain, primary consideration is ovarian torsion with edematous left ovary. Additional consideration is a torsed pedunculated fibroid. Tubo-ovarian abscess remains in the differential consideration in the appropriate clinical setting. Recommend STAT gynecologic evaluation and pelvic ultrasound with Doppler for further evaluation.” A pelvic ultrasound with Doppler was requested and showed “No left ovary visualized with 7 cm pelvic mass which contains peripheral flow, but absent central flow. Given the reported history of acute onset abdominal pain, findings remain highly concerning for ovarian torsion.”
Gynecology was consulted, and patient underwent a diagnostic laparoscopy. She was found to have a 7 x 6 x 6 cm left pelvic mass with ovarian torsion. A left salpingo-oopherectomy was performed. Later, the pathology reports showed an ovarian granulosa-theca cell tumor, adult type. Patient underwent a TAH/RSO and initiated chemotherapy.

Discussion
The vast majority of patients with ovarian torsion present with sudden onset, unilateral, severe, persistent lower abdominal pain and pelvic pain, often associated with nausea and vomiting. About 25% of patients experience bilateral lower quadrant pain, which is usually described as sharp and stabbing. Patients with intermittent ovarian torsion have a more prolonged time course. They typically experience pain intermittently and present for evaluation 1 to 3 days after onset of symptoms, resulting in delayed diagnosis.5-7 Our case is an example of the latter clinical scenario. Unilateral adnexal tenderness is a common physical finding but is nonspecific. Typically, the right ovary is more likely to develop torsion, possibly because the presence of the sigmoid colon on the left side has a stabilizing effect. In our particular case, the torsion occurred in the left ovary.

Our patient initially underwent a CT abdomen and pelvis with contrast, which raised the suspicion for ovarian torsion due to lack of visualization of the left ovary and the presence of a large mass. In the workup of ovarian torsion, pelvic ultrasound is the imaging modality of choice.8 Ultrasonography with color Doppler analysis can help in determining whether blood flow is impaired, but it’s important to remember that Doppler flow is not always absent in torsion.9,10 Subsequently, a Doppler ultrasound showed no visualization of the left ovary and a 7 cm pelvic mass with peripheral flow, but absent central flow (Figure 1).

Our patient was admitted to the hospital and underwent a diagnostic laparoscopy with left salpingo-oopherectomy.

Our patient was diagnosed with adult-type granulosa-theca cell tumor, which belongs to the category of sex cord–stromal tumor.  Granulosa-theca cell tumors are also known as granulosa cell tumors (GCTs) and include tumors composed of granulosa cells, theca cells, and fibroblasts in varying degrees of combinations. GCTs account for approximately 2% of all ovarian tumors and can be divided into adult (95%) and juvenile (5%) types based on histologic findings.11

Regardless of whether the radiologic studies yield normal results, a patient with a history and physical examination findings suggestive of ovarian torsion should still be evaluated by a gynecologist and possibly undergo laparoscopy. 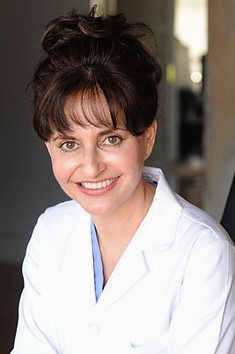