Urgent message: Failure to correctly diagnose and provide immediate treatment for varicella zoster virus (VZV) infection in pregnant patients can lead to life-threatening complications for the mother, and serious congenital malformations to the fetus.

There are several types of skin lesions and rashes that are common during pregnancy. Some are benign and confer no risk to the expectant mother or the fetus. However, some are symptoms of more serious pathology, and infectious causes of rashes may affect the mother at any trimester, though morbidity and mortality may be higher in one trimester over another.

With more and more people choosing not to vaccinate, we are seeing a decline in herd immunity. Combined with widespread human emigration trends, we are also seeing infectious diseases that were previously rare, or almost eradicated in North America. Being relatively immunosuppressed, pregnant women and their fetuses are at an increased risk of certain infections and are more susceptible to severe complications. Any of the STORCH infections—syphilis, Toxoplasma gondii, rubella, cytomegalovirus, herpes simplex—and others (human immunodeficiency virus, hepatitis B and C, parvovirus B19, enterovirus, varicella zoster virus [VZV], and Leptospira interrogans) can occur in pregnancy, with the gestational period determining the severity of the infection and their long-term effects.1

A 31-year-old female, CM, presented to the urgent care center at 18 weeks of gestation with a 1-day history of a pruritic rash, consisting of discrete erythematous papules and vesicles with bilateral dermatomal distribution. There were some intact vesicles while some had ruptured and were covered by a golden crust. The rash was limited to her neck, upper extremities, and torso. CM also had similar lesions and shallow ulcers on her soft palate on tonsils associated with sore throat. The patient reported a low-grade fever a few days prior to onset of the rash. She also reported being fully immunized as a child, and that she never had VZV in the past. She did, however, report being in India recently; soon after she left, CM found out that two of her household contacts had been diagnosed with chickenpox. 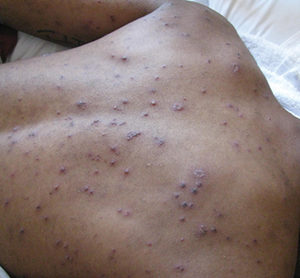 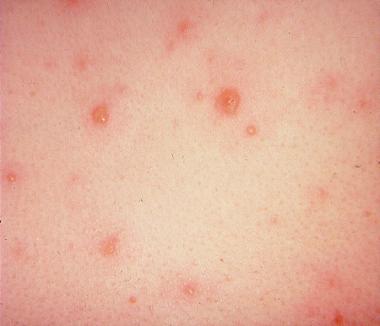 Pregnancy-specific noninfectious dermatoses that present as pruritic raised lesions include:

The presentation and the treatment of each tend to overlap, with some exceptions, and the pregnancy outcomes range from no significant adverse effects to intrauterine fetal demise. Infectious causes of rash in pregnancy are vast, including the STORCH infections mentioned previously.

CM was diagnosed with VZV based on her history and physical exam. She had the characteristic rash of VZV—papules, vesicles, and pustules, at different stages of development, on erythematous base (Figure 1 and Figure 2). After consulting with the infectious disease specialist, CM was admitted to the hospital to receive IV acyclovir.

The diagnosis is clinical. If in doubt, skin scrapings from the base of vesicle can be used for viral DNA testing through PCR with high sensitivity and specificity.3 Other options include direct fluorescent antibody testing and viral culture.4,5

VZV is a DNZ virus, part of the herpes virus family, and is highly contagious.6 Humans are the only hosts of VZV, and the virus infects though nasopharyngeal mucus membranes and conjunctivae.6 After an incubation period of 10 to 21 days, the patient experiences nonspecific symptoms of malaise and low-grade fever. After about 5 to 7 days, the patient develops the characteristic rash—pruritic or painful vesicular lesions on erythematous base, appearing in crops, some crusted over, others intact (again, see Figure 1 and Figure 2).6

In the immunocompetent population, VZV rarely leads to serious complications. However, if the infection occurs during pregnancy, or in the otherwise immunosuppressed patient, the complications are severe; VZV infection is one of the STORCH infections of pregnancy.1

In the United States, there are approximately 1.2 cases of VZV per 10,000 pregnancies and the incidence of VZV pneumonia, one of the most common complications of VZV in pregnancy, is 2.5%.7 VZV pneumonia presents with cough, dyspnea, and tachypnea, and can rapidly progress to respiratory failure.8 Another complication of VZV in pregnancy is congenital varicella syndrome, which consists of defects of the central nervous system, skin, limbs, and subcutaneous tissues, with the most common consequences being intrauterine growth restriction and low birth weight.6,9 Viral transmission to the fetus can occur through the placenta, or via respiratory droplets or direct skin contact in the postnatal period.10 If the infection occurs in the first 20 weeks of gestation, the risk of congenital varicella syndrome is much higher than if the infection occurred later in the pregnancy.6,9

After recognizing VZV infection, treatment should be started right away. For “uncomplicated” varicella infection, which consists only of the rash, treatment is oral or intravenous acyclovir 800 mg five times a day with serial prenatal ultrasound monitoring. If complications arise, such as varicella pneumonia, treatment consists of hospitalization and IV acyclovir 10 to 15 mg/kg of body weight every 8 hours for 5–10 days. That treatment should begin within 24 to 72 hours of rash onset.

If the onset of maternal rash occurs between 5 days before and 2 days postdelivery, the neonate requires varicella immunoglobulin vaccine.11 While no formal trials have been done in pregnant women exposed to acyclovir, a prospective registry of women and their infants exposed to oral or IV acyclovir during various stages of their pregnancies did not show a significant increase in the rate or type of birth defects compared with the general population.12

Pregnant women and their fetuses are susceptible to a wide array of unique conditions, including common and uncommon infectious diseases. Relatively benign infections can have devastating consequences in this special population. As more and more people choosing not to vaccinate, and with increasing human migration rates, infections that were previously considered rare in North America are making a comeback—with chickenpox being one with potentially serious consequences for the mother and the baby if it occurs in first 20 weeks of pregnancy or in the perinatal period. It is important to quickly recognize this characteristic rash and provide prompt treatment to avoid lifelong complications, and to reduce morbidity and mortality.

Samrana Arefeen, MD practices urgent care and family medicine in New Jersey. Khalid Aziz, MD is the Founder and Medical Director of Urgent Care of NJ. The authors have no relevant financial relationships with any commercial interests.

A Pregnant Mother Presenting to Urgent Care with Chickenpox

Founder and Medical Director, Urgent Care of NJ
Share this !