Urgent message: Brugada syndrome is a genetic disorder associated with increased incidence of ventricular tachyarrhythmias and sudden cardiac death. There have been cases associated with fever, viral infections, and pneumonias—all conditions urgent care clinicians treat in abundance. This case report demonstrates how urgent care providers can diagnose a potentially lethal disorder when patients are being seen for febrile illnesses.

A 55-year-old male with a history of hypertension, hyperlipidemia, and allergic rhinitis presented to a local urgent care with a 3-4 day history of productive cough and headache. He also complained of fatigue and postnasal drainage, in addition to chest congestion. He had no subjective fevers and his temperature was 37.2⁰C in clinic. He initially assumed his symptoms were allergy-related and tried several over-the-counter cold preparations to alleviate his symptoms. On review of systems, he denied complaints of chest pain, palpitations, edema, or shortness of breath. There was no reported family or personal history of cardiac disease. He took no regular prescription medications.

The differential for the patient’s tachycardia included medication use (decongestants), pulmonary embolism (PE) (although not hypoxic), myocarditis, dehydration, or underlying undiagnosed cardiac condition. Of note, there was a low suspicion for dehydration, as he did not report any vomiting or diarrhea and was maintaining a good oral intake. The differential diagnosis for cough and URI symptoms included viral URI, influenza, acute viral bronchitis, pneumonia, or allergy.

An EKG was ordered to evaluate the unexplained rapid heart rate (Figure 1) showing sinus tachycardia at 122 bpm, with ST elevation in V1 and V2 and T wave inversion in aVL. Although asymptomatic on examination, the etiology of the patient’s focused ST elevation was unclear, and the patient was treated as a potential STEMI. We administered aspirin 324 mg orally and placed him on supplemental oxygen for comfort. EMS was called and the patient was transported to the ED.

In the ED, patient was evaluated by a cardiologist. A repeat EKG (Figure 2) showed improvement but not complete resolution of the ST elevation in V1 and V2. Prior review of an EKG performed in 2003 revealed a slight ST elevation/J point elevation in V2, but not to the same extent as the one performed in urgent care. The troponin was negative, and bedside echocardiogram showed no wall motion abnormality. The tachycardia improved after IV fluids. A chest x-ray demonstrated a mild perihilar infiltrate, and he was therefore diagnosed with pneumonia and discharged home on azithromycin (of note, the EKG did not show QT prolongation). 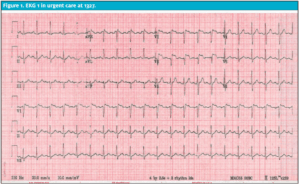 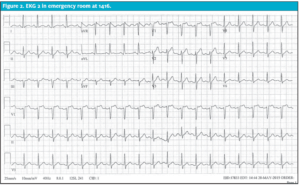 The patient followed up with cardiology 2 weeks after this, and had a normal EKG at that office visit. The diagnosis of the urgent care EKG was type II Brugada pattern. The patient had no symptoms, and subsequently wore a continuous cardiac monitor for 2 weeks, revealing no significant atrial or ventricular arrhythmias. Therefore, no further testing was recommended.

Brugada syndrome can be divided into two clinical entities:

Brugada syndrome is most common in men, with an average age of 41, particularly in those of Asian descent. While the prevalence of Brugada syndrome among patients with Brugada patterns has not been well studied, a 2006 meta-analysis in the Journal of Cardiovascular Electrophysiology found that “the findings of a history of syncope or sudden cardiac death, the presence of a spontaneous Type 1 Brugada ECG, and male gender predict a more malignant history.”1

Patients with Brugada syndrome may present with palpitations, lightheadedness, or syncope in the setting of characteristic EKG findings. In severe instances, Brugada syndrome can present as only cardiac arrest. It is notable that the arrhythmias generally occur more commonly at night and are not related to exercise.

On EKG, there is ST segment elevation in leads V1 to V2 in either of the following two patterns:

In some patients, these characteristics are transient or variable over time. Provoking factors include medications (sodium channel blockers, calcium channel blockers, beta blockers, tricyclic or tetracyclic antidepressants, lithium, and some local anesthetics), metabolic abnormalities involving potassium or calcium, alcohol, cocaine, vagal maneuvers, and fever. Patients with acute symptoms including fevers, treatment with sodium channel-affecting medication, drug overdose, or electrolyte imbalances who present with a Brugada-type EKG are at much higher risk of sudden cardiac death.3

Patients with EKG findings consistent with the Brugada pattern should first have other causes of ST elevation ruled out; immediate consultation with a cardiologist is recommended. In patients without symptoms, current recommendations are for observation without therapy (Figure 3).4 In symptomatic patients, management ranges from observation to pharmacologic challenge and/or therapy, to ICD placement or catheter ablation. 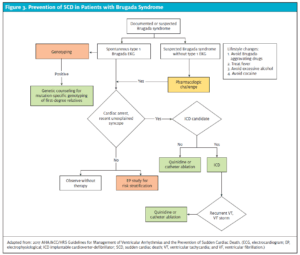 Figure 3. Prevention of SCD in Patients with Brugada Syndrome

The main challenge with this case was determining the etiology of the patient’s tachycardia, particularly as he was afebrile on presentation without symptoms beyond those consistent with a URI. Fever, viral infections, and pneumonias are common in urgent care and often cause mild benign tachycardia. The first step in distinguishing the benign tachycardia from the critical, however, is recognizing that there is an abnormality to be investigated. One review of emergency department patients found that abnormal vital signs, particularly unexplained tachycardia, were noted commonly in patients who experienced an unexpected death within 7 days of ED presentation.5

Tachycardia, or a heart rate >100 beats per minute, has a broad differential that spans from the benign to the life-threatening including patients with pain, fever, anxiety, medication or substance use, dehydration, blood loss, sepsis, and/or cardiac or endocrine emergencies. Though history and examination will often reveal the etiology, in our case, with a persistent and significant tachycardia, further work-up was pursued.

While the patient in our case fortunately did not require additional therapy, his presentation served as a valuable opportunity to investigate an abnormal vital sign further, and rule out what could be a life-threatening arrhythmia for some patients.

Kathleen B. Raschka, MD, is an Assistant Professor of Family Medicine at Loyola University Medical Center.

When Is Tachycardia in a Patient with URI Symptoms a Sign of Something More Serious?