Crowding is a major barrier to timely and effective patient care in emergency departments. Crowding occurs when the demand for care exceeds the ability to supply it in an efficient fashion. This is often due to inpatient bed availability (patient boarding), increased patient complexity requiring longer stays in the ED, and overall decrease in the number of EDs.1 According to the Institute of Medicine Report, Hospital-Based Emergency Care: At a Breaking Point, ED crowding was noted to be a cause of error and a risk to patient safety. Additionally, adverse events are more likely to occur due to crowding and thus patient safety is at risk.1 Mahler, et al established that crowding resulted in emergency medicine residents evaluating fewer patients and performing fewer procedures; however, they concluded that no noticeable decrement to resident education was noted.2 Due to crowding, lower-acuity patients have had long waits to see an emergency provider and leave without being seen by a provider at a higher rate than higher-acuity patients.

In an effort to improve wait times, patient satisfaction, and LWBS rates, many community and academic EDs have introduced programs to more rapidly triage, evaluate, and treat low-acuity patients in designated areas such as triage rooms so rooms necessary for critically ill and injured patients requiring a higher level of care. Current research has demonstrated that provider-in-triage programs improve ED time-based metrics such as door-to-provider time, total ED length of stay, and decreased LWBS rates.3-5

The emergency department studied is part of an academic medical center and has an annual combined patient volume of 51,000 patients in the adult and pediatric emergency departments. In February 2017, we implemented a provider-in-triage program called the “rapid medical evaluation” (RME) program to improve time-based ED metrics.

The RME program included staffing a dedicated attending physician, ED nurse, and ED technician to staff our five-room triage area from 2 pm to 8 pm, Monday through Friday. This was determined to be the busiest time period in the ED based on previous data collected around patient arrival times and occupancy heat maps. The RME provider expeditiously evaluates, treats, and discharges appropriate patients triaged to Emergency Severity Index (ESI) level 4 or 5, as these patients historically experience the longest wait times and are more likely to leave without being seen. Additionally, RME providers also initiate workups on higher-acuity patients to expedite appropriate testing and treatment until a room became available.

A survey was developed using a 5-point Likert scale with questions based on the ACGME Milestones for Emergency Medicine, as well as prior work from Nicks et al.6 A read-aloud technique was used to validate the survey and was trialed on affiliate faculty not directly involved in the study. The survey was completed by faculty and resident emergency physicians 4 months after RME program implementation. All surveyed faculty and residents had worked in the ED in the 4 months prior to implementation. Surveys were anonymous and collected on a voluntarily basis with no compensation for participation. Data were collected in February 2017 (prior to implementation) and over 6 weeks between June and September 2017.

Descriptive statistics (median, IQR) were generated for each question from the survey and were evaluated both for individual resident classes (PGY1, PGY2, PGY3), for overall resident perception, and for attending physicians. Raw frequency tables were generated for each question. A Friedman chi-square test was used to test for consistency across each resident class. A Kruskal-Wallis test was used to test for differences in perceived impact between respondents of different resident classes. A Wilcoxon two-sample test was used to compare the perception of the RME program impact on education between residents and attending physicians.

ED metrics were collected at 4 months postimplementation and compared with pre-RME implementation metrics. Table 1 shows the ED metric effect of implementing the program.

The faculty EP-perceived impact on resident education by PGY level is shown in Table 2 and Figures 1 and 2. 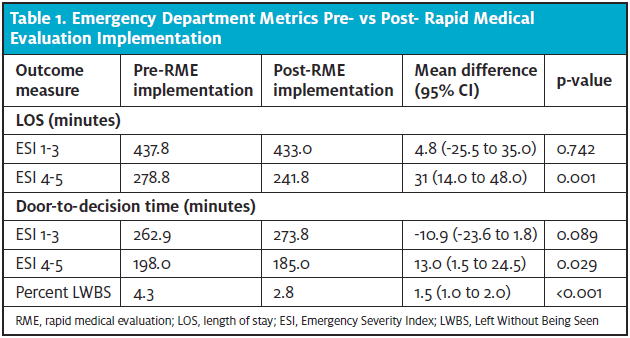 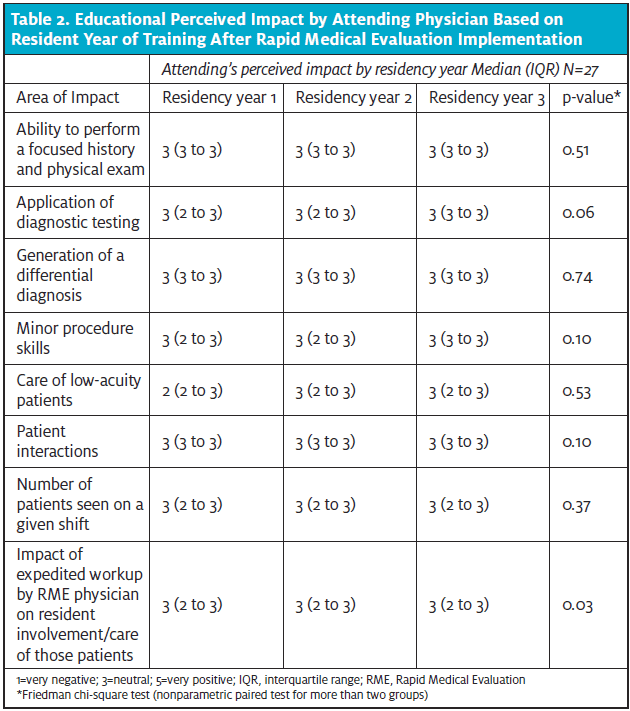 The impact of RME on PGY1 residents (n=6), PGY2 residents (n=6), and PGY3 residents (n=10) is demonstrated in Table 3 and in Figures 1 and 2. Across all three resident classes, there was a positive perception of how RME impacted patient interactions (p<0.01). Comparison of differences in resident perceptions by training level were found not to be statistically significant as seen in table 3. 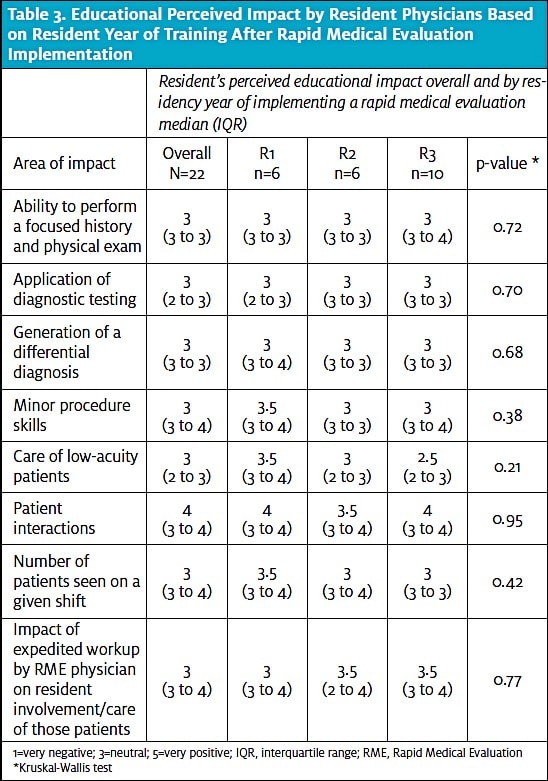 Impact of the RME program on resident and attending performance, as well as physician wellness, faculty teaching time, overall quality of care, and patient turnover was also evaluated and compared. The results are illustrated in Table 4 and show a statistically significant improvement (p<0.001) on residents’ general interaction with patients with perceived improvement across the board in other categories. Residents and attendings generally agreed about the impact of the RME program on resident education as seen in Table 4.

Figure 1 and Figure 2 show the distribution of responses by attending EPs and resident EPs. 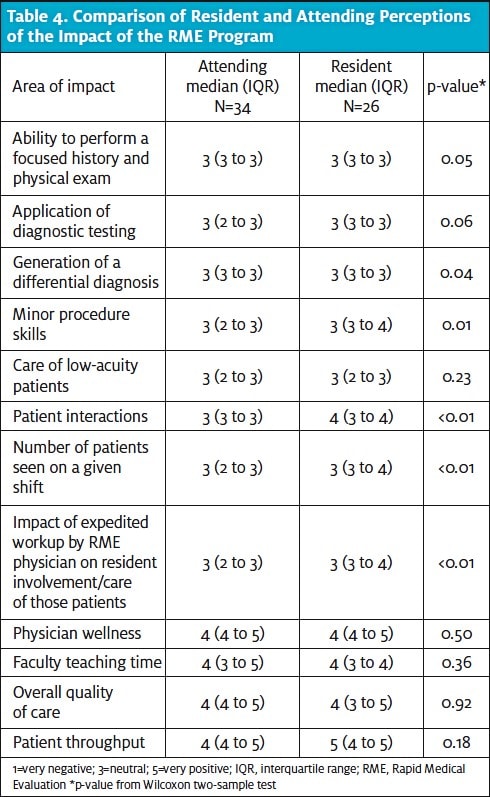 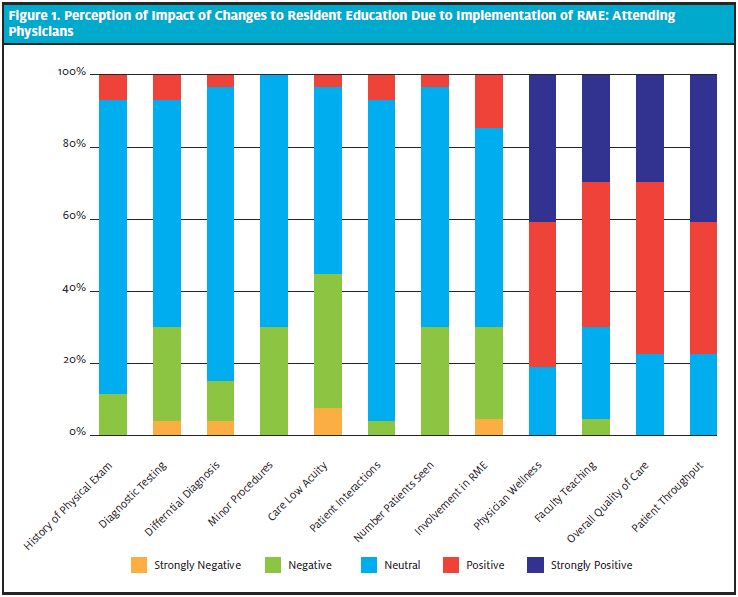 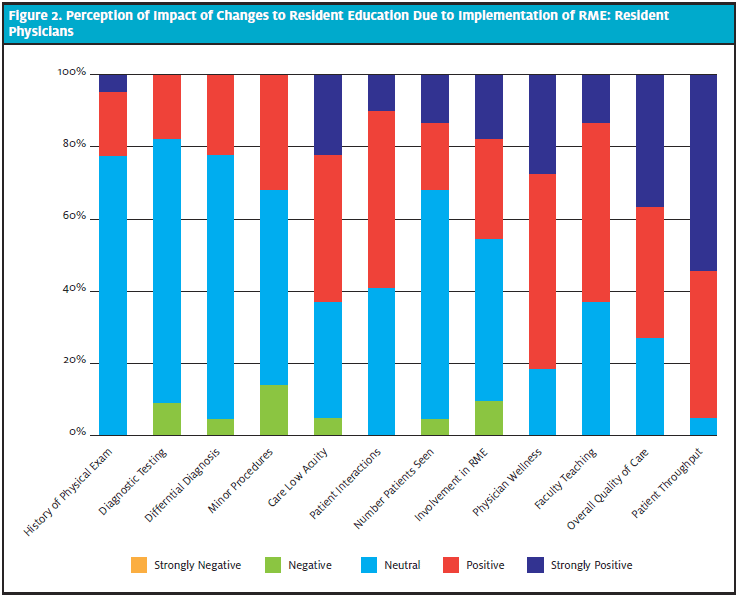 In academic and teaching emergency departments, crowding is a common problem that impedes clinical care, efficiency, and education. While certain provider-in-triage programs have been shown to improve clinical care and patient throughput,1 it is important these do not negatively impact resident education. In their prospective cross-sectional survey study on attending triage physicians’ effect on resident education, Nicks et al’s accumulated data suggested increased patient satisfaction at the cost of resident education related to formulating a differential diagnosis, diagnostic ordering, and medical decision-making.4 The RME program implemented in the academic medical center ED described above demonstrates the ability to improve clinical ED metrics without the perception of negatively impacting education.

The RME program had a positive effect on a variety of ED operational measures. The assessed ED benefits included a statistically significant decrease in length of stay, door-to-decision time, and percent of patients left without being seen particularly for patients in the ESI 4-5 categories. Improvement in wait times in the ED is correlated with increased patient satisfaction. The reduction in the percent of patients who leave without being seen contributed to increased access to ED patients.

By collecting subjective data from RME, attending physicians, and residents from all PGY years, we were able to assess the perceived impact of the RME program on resident education. Both faculty and residents responded that there was a positive effect on faculty’s ability to teach residents during acute shifts, overall quality of care provided, patient throughput, and physician wellness. There were also no significant detrimental effects on resident performance at all three experience levels. The positive effects are likely due to a variety of reasons, including treating and focusing on higher-acuity patients, having the flexibility with time and rooms to treat patients more appropriately, and not feeling rushed to turnover ED rooms as quickly.

Overall, both EP and residents responded that the RME program had a neutral to positive impact on various ACGME milestones, indicating that this program improved ED quantitative metrics without negatively affecting resident education. By rapidly evaluating ESI 4-5 patients, RME programs efficiently and effectively decrease length of stay, door-to-decision time, and percent of patients who leave without being seen, while increasing throughput in the ED and overall bed availability for higher-acuity patient and improving overall physician wellness and teaching opportunities without causing any detriment to resident education. Given some slight negative perceptions regarding resident involvement with lower-acuity patients being an important aspect of EM training, future studies should address how best to integrate residents and students into the RME structure as providers.

This is a small, single-site study and is subject to inherent issues with survey study design, including post-hoc recollection and the potential for recall bias.

Due to its subjective nature, there is also limitation in the data collected around the RME impact on resident education.

Furthermore, there is variation in RME program designs and implementation, as well as resident programs nationally, which potentially decreases the external validity of this study. However, given the dearth of prior research into the educational effect of a rapid medical evaluation program, our study addresses a significant void in our collective understanding of the impact of such programs. Further research is needed to generalize data for other academic medical centers and to confirm there is no deficit to resident education through RME program implementation.

In the OHSU Department of Emergency Medicine
Share this !