Urgent message: Familiarity with the schedule for immunization against pertussis, as well as expertise in diagnosing and prescribing treatment, should be within the urgent care provider’s capabilities—as should the ability to distinguish which patients require transfer to a higher-acuity setting. 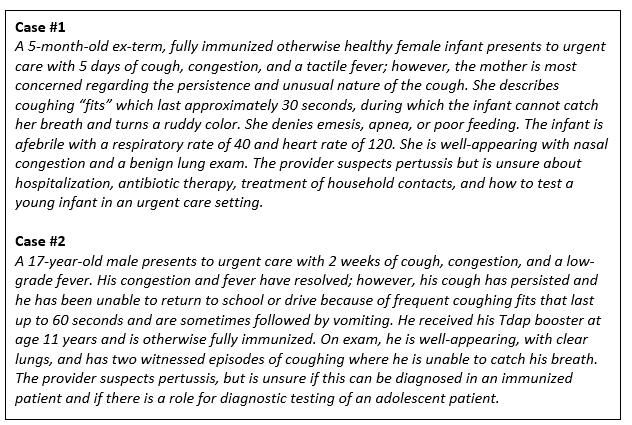 Pertussis is a toxin-mediated disease caused by the gram-negative coccobacillus Bordetella pertussis. Toxins produced by B pertussis impair ciliary clearance of pulmonary secretions through the paralysis of normally beating cilia.1

Childhood immunity to pertussis is conferred through the administration of the acellular pertussis vaccination, which comes in two forms: DTaP and Tdap. Children are immunized with DTaP at 2 months, 4 months, 6 months, and 15-18 months of age. A booster dose of DTaP is given at 4-6 years old, and a second booster dose of Tdap is given at 11-12 years of age.2 The risk of acquiring pertussis increases six-fold after the fifth year following the initial 5-dose DTaP regimen.3,4 Similarly, vaccine effectiveness can wane to approximately 34% in the 2-4 years following a dose of Tdap.5 The greatest risk of obtaining pertussis occurs in young infants and children who have not obtained their full series of DTaP, as well as older children with waning immunity.

The catarrhal phase lasts approximately 1-2 weeks and is often mistaken as a viral upper respiratory infection, as it includes cough, coryza, and a low-grade fever. The paroxysmal phase can last up to 10 weeks and usually prompts the clinician to consider the diagnosis of pertussis. During the paroxysmal phase, the patient has paroxysms of cough followed by an inspiratory whoop and post-tussive emesis or gagging. The patient can have either a ruddy or cyanotic color change. The convalescent phase lasts 2-3 weeks and is characterized by a gradual decrease in coughing frequency and severity.1,6

Infants are most likely to have an atypical clinical course which is characterized by a short catarrhal phase and a more severe and atypical paroxysmal phase. Instead of paroxysms of cough with post-tussive emesis, infants may have gagging, gasping, bradycardia, and apneic events with the absence of the classic inspiratory whoop.1,6,7 Infants are therefore at risk for severe complications associated with the apnea and bradycardia that may require hospitalization, especially when accompanied by hypoxemia or cyanosis. Infant pertussis can progress to pneumonia or death.1,2,6,7 Infants <2 months of age who are not eligible for their first DTaP are at the highest risk of death from pertussis.8

Pertussis presenting in older children and adults follows a typical course, with prolonged cough often accompanied by the classic inspiratory “whoop.” Adolescents and adults who have been previously immunized may have milder illness with prolonged dry/harsh coughing fits in the absence of the classic “whoop.”

When considering the diagnosis of pertussis, clinicians should consider the following questions:

Question 1: What is the likelihood that the patient has pertussis?

The diagnosis of pertussis can be made when a patient presents with classic clinical symptoms as described above. Laboratory testing is not required to initiate treatment, especially since early treatment during the catarrhal phase can improve the clinical course of the disease.6

Clinicians should discuss the nature of the cough with the family, specifically asking whether the cough comes in prolonged bursts and is followed by an inspiratory whoop and post-tussive emesis or gagging. The lack of inspiratory whoop or post-tussive emesis in young infants should not preclude the consideration of pertussis if the cough is paroxysmal. Infants presenting solely with apneic events should also prompt the consideration of pertussis and a transfer to the ED. Vaccination-conferred immunity wanes over time. Therefore, a fully immunized child can still be infected with B pertussis.3-5

The likelihood of pertussis also increases with known exposures to pertussis. Clinicians should therefore not only discuss the symptoms of the patient, but also ask about other members of the household who may have symptoms concerning for pertussis.

Question 2: Is the patient at risk for having pertussis-related complications?

Complications include apnea, bradycardia, pneumonia, and death. There are no existing clinical decision rules to assess risk; however, studies point to certain groups who are at highest risk for severe complications as seen here and in Table 1.

Question 3: Are the close household contacts at risk?

The clinician’s exam should focus primarily on the pulmonary exam, specifically focusing on evidence of respiratory distress, hypoxia, or focality on auscultation. The clinician should also pay special note to the patient’s hydration status, as infants are prone to have feeding difficulties.

The management questions for the pediatric patient with suspected pertussis are outlined in Table 2 and summarized below.

Laboratory options include pertussis culture or pertussis PCR, both of which can be collected via a nasopharyngeal swab or aspirate.2 Pertussis culture has high specificity but relies on live bacterium and therefore is less sensitive later in disease course and in the setting of prior antibiotic use. Pertussis PCR has higher sensitivity as it does not rely on live bacterium, but individual tests can vary in specificity. The CDC recommends that culture be used within the first 2 weeks of cough onset and PCR within the first 4 weeks of illness.2

Regardless of age, antibiotic therapy should be initiated prior to or in the absence of testing for any child who has a clinical picture that is strongly suggestive of pertussis, or for a child at high risk of pertussis-related complications. Early antimicrobial therapy may attenuate the severity of the disease, especially if it is administered during the catarrhal phase when live bacterium are still present,1,6 and will help curtail spread of disease. As the disease is toxin-mediated, treatment initiation later in the disease may have little impact on symptoms, but is still worthwhile as it decreases the risk of transmission.

Antibiotic options are outlined in Table 3. Azithromycin is the first-line medication recommended for both treatment and prophylaxis of pertussis, especially in young infants who may be at risk for complications with other agents, including kernicterus and idiopathic hypertrophic pyloric stenosis.2

Table 3. Antibiotic Options for Patients with Suspected (or Confirmed) Pertussis2 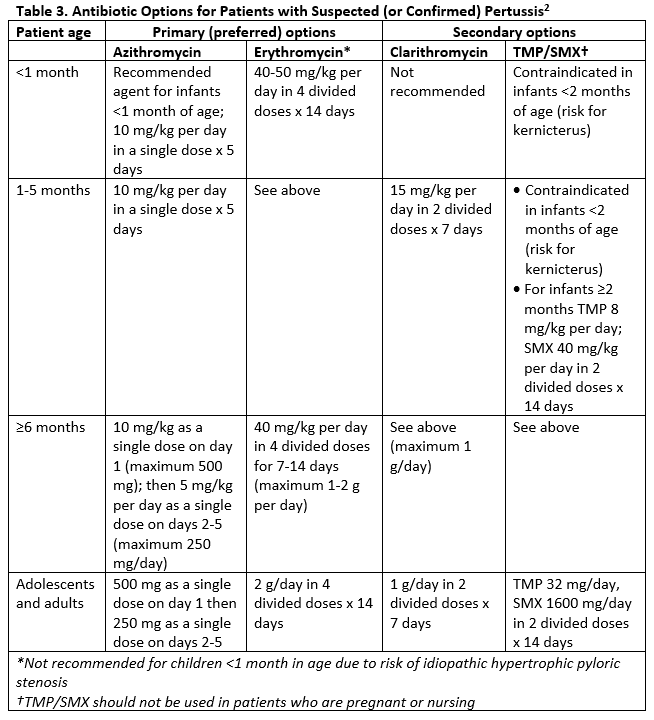 The decision of whether to admit will be based on the clinical exam and the patient’s overall risk for developing severe pertussis. Symptoms such as respiratory distress, hypoxemia, apnea, cyanosis, or dehydration would suggest a need for hospitalization or prolonged observation. Infants who require admission for management of apnea or bradycardia should be admitted to an institution with pediatric expertise, and preferably a pediatric intensive care unit. High risk factors for pertussis complications include infants less than 4-months-old, infants with history of premature birth, and immunocompromised patients.

Even if we are not caring for other family members during the encounter, it is important to curtail the spread of disease and manage close contacts. Household contacts should be offered a course of prophylaxis within 21 days of exposure if asymptomatic, and treatment if symptomatic,2 especially if underimmunized. Prophylaxis should also be considered in nonhousehold, close contact exposures who meet high-risk criteria, including:

Clinicians should complete the appropriate reporting forms to their state department of public health when initiating treatment for pertussis.

As pertussis is a toxin-mediated disease, the cough may last for a significant amount of time after the bacterium is cleared. The cough can be debilitating and impact the quality of life for the child and their family. As the cough is a reaction to the damaged cilia, there are very few remedies that will impact the patient’s symptomatology. Importantly, the FDA recommends against the use of codeine or hydrocodone in all children and does not recommend using any over-the-counter cough or cold medications in children less than 2 years of age.12

Back to school, work, or daycare

Patients may return to school following completion of 5 days of antimicrobial therapy and if their symptoms are reasonably managed. Patients who do not receive therapy should be excluded from school until 21 days after the onset of symptoms.6 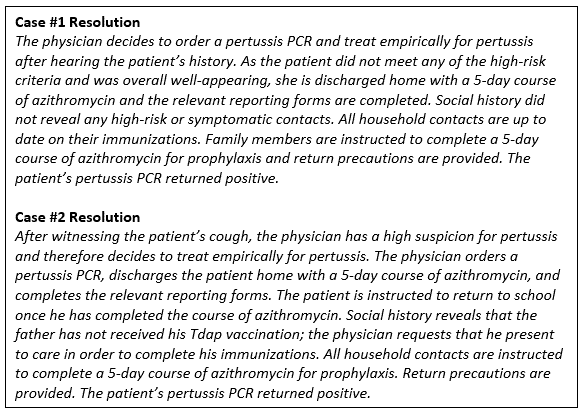 Ellen Laves, MD is Assistant Professor in Pediatrics at the University of California, San Francisco. The author has no relevant financial relationships with any commercial interests.

Suspected Pertussis in Infants and Adolescents—What to do?