Urgent message: Common nasal infections can have serious health consequences if not quickly diagnosed and treated.

Both children and adults present to urgent care centers with nasal pain. Infectious causes of such pain include impetigo, furuncles, and nasal vestibulitis (NV). Noninfectious causes include squamous cell cancer and lupus vulgaris. A careful physical examination and a thorough medical history can allow the health-care provider to rule out more serious conditions or to transfer the patient to an emergency department if life threatening conditions are present. 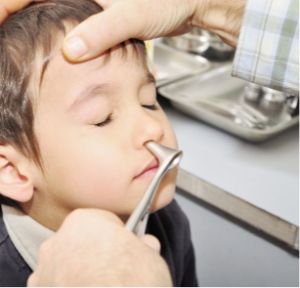 A 6-year-old boy was brought to an urgent care center, where he reported that his nose had been hurting recently. He had a lot of crusts that initiated from inside the right nostril, similar to what is shown in Figure 1. His parent reported that his symptoms had gradually worsened over the preceding 7 to 10 days. Initially he had crusting alone, but then the interior of his right nostril became tender and gradually became more painful, with small amounts of bleeding on crust removal. The parent reported that the boy had not been running a fever but did have a cold (viral upper respiratory infection) that resolved in the week prior to the onset of the crusting and pain. The boy was otherwise healthy, with no chronic diseases, and his immunizations were up to date. His vital signs were within normal parameters

On physical examination, the outside of our patient’s nose looked normal. However, when a speculum examination was done, it was apparent that both nasal vestibules and other inner nose tissues were erythematous, the right side more so than the left. On the rightside, the area next to the inferior septum had crusted, dried discharge with some excoriated areas. Findings on examination of his ears and mouth were unremarkable.

Other possible causes of our patient’s condition included impetigo in the nose, but impetigo does not generate the amount of pain seen in our patient. In some patients with nasal pain, the external tip of the nose is bright red. This is called the Rudolph sign, and it should alert the health-care practitioner to the presence of a furuncle, or abscess, under the erythematous tissue or inside the superior inner nose.1 If there is a furuncle present, it should be incised and drained, and the patient should be given clear instructions to not squeeze the infected area, to avoid causing cavernous sinus thrombosis (CST). Squamous cell cancer inside the nares can look very similar to a nasal infection, but healing will not occur with antibiotics. It is important to give clear instructions for the patient to return—or, if the patient is a child, for the patient’s parent or guardian to bring the child back—to the urgent care center if symptoms recur or do not decrease. The provider should keep in mind that lupus vulgaris, an uncommon form of cutaneous tuberculosis, is a possibility, but it is a condition that would not heal with antibiotic treatment.

Our patient had NV. The hallmark manifestations are pain inside the nose and crusts that sometimes cause bleeding when removed. There may be excoriation and fissuring in the vestibule if the infection is severe. Our patient’s NV was severe, but most patients present before outer signs are visible, and it is necessary to perform a careful examination with a lighted nasal speculum in order to see abnormalities. Swelling of the nasal vestibule, erythema, heat in the area, and fissuring of the skin by the septum or at the entrance of the nares are other common symptoms. An infection may be a result of normal nasal bacterial carriage, or it can be transmitted from fingers if the nose is picked frequently. The infectious agent that most frequently causes NV is Staphylococcus aureus. It is important to consider methicillin-resistant S. aureus (MRSA) as a possible etiologic agent, depending on community prevalence. Herpes simplex has also been documented
as a cause of NV,2 but its presence is relatively easy to determine from its characteristic lesions. Obtaining a culture from a patient with NV is difficult because only crusting may be present. There are more unusual causes of NV, but they are rare. A history of travel by the patient or other unusual events can be helpful in teasing out unusual causes, such as leishmaniasis3 or Nocardiopsis.4

Causes NV frequently develops after an upper respiratory tract infection as copious mucoid nasal discharge decreases and is replaced by crusts that the patient either picks out of the nose or pulls out with tissue. Removing the crusts may cause small amounts of bleeding. NV is common in children, and the cause in children is likely nose-picking, which increases the risk of tissue trauma and inoculation with S. aureus. If nasal symptoms in a child are unilateral, however, assume that there is a foreign body in the nose, and perform a careful speculum examination. Button batteries in the nose can perforate the septum in as little as 2 to 7 hours,5 so if the presence of such a battery is suspected, the child should be referred to an emergency department. [Editor’s note: see “Pediatric Periorbital Cellulitis from an Intranasal Button Battery” at https://www.jucm.com/pediatric-periorbitalcellulitis-from-an-intranasal-button-battery/.] Other common causes of NV are allergic rhinitis, folliculitis from a nasal hair, and a pustule or furuncle inside the nose.6 Patients may think that they have a pimple inside their nose because of the degree of tenderness in the area. Any condition that alters the normal mucosal barrier and results in epithelial breaks with potential portals of entry by bacteria can cause NV. Other conditions that can increase the risk of NV are dry environments with low humidity, the use of iso tre tinoin, and smoking.2 Conditions and treatments that predispose the skin to infection, such as using epidermal growth factor receptor inhibitors for cancer treatment, have been documented as risk factors for developing NV.7 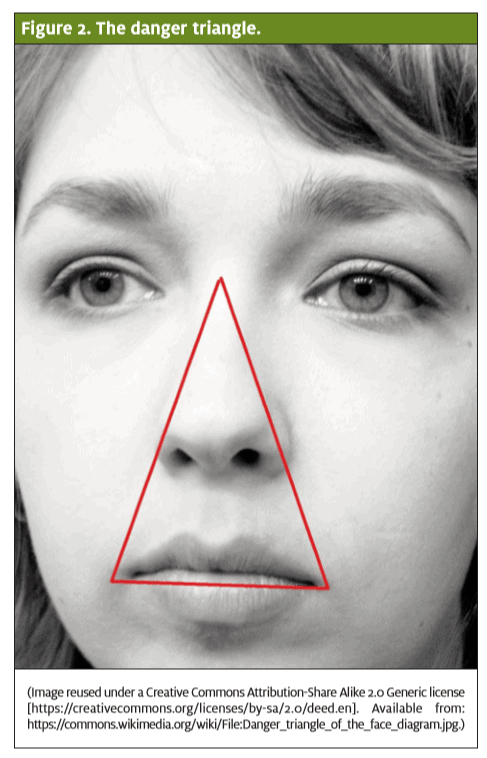 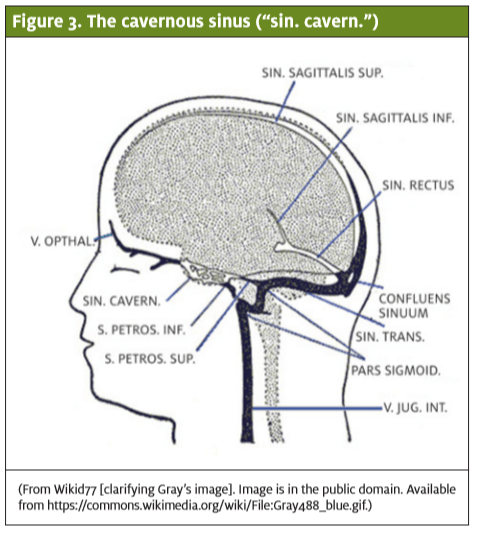 The most common complications of NV are abscesses and facial cellulitis. The most serious complication of NV is CST, which develops when an infection spreads from the “danger triangle” (Figure 2) of the face. The nose and upper lip area form a triangle from which blood drains into valveless veins. Bacteria can enter the venous system there, and because of the lack of valves, they spread backward into the brain. This can lead to bacteria in the cavernous sinus (Figure 3), which can cause clotting or obstruction.8 The cavernous sinus houses several cranial nerves that pass through the brain (Figure 4). Cranial nerve VI, the abducens nerve, travels through the middle of the sinus alongside the internal carotid artery. The cavernous sinus is composed of highly trabeculated tissue that contributes to clot formation after bacterial infections, and clots can cause obstruction and swelling. CST is most frequently
caused by nasal infections, including furuncles and ethmoidal or sphenoidal sinusitis, and less often by dental infections.8,9 Spreading of bacteria through orbital infections or otitis media is less common.10 A persistent, worsening headache is a cardinal symptom of CST and one of its earliest symptoms.8,9 Such a headache may precede fever or ocular signs, and it occurs in most patients (50%–90%) with CST. Desa and Green9 reported that nuchal rigidity was present in about one-third of the cases they reviewed. Pressure on the cranial nerves in the cavernous sinus predominantly affects vision and results in a myriad of visual abnormalities. Ocular signs occur in 80% or more of individuals who have CST, and they frequently include orbital pain and fullness caused by venous congestion and obstruction.10 Chemosis, proptosis, ptosis, and periorbital edema often occur as a result.9 Other visual manifestations include sluggish pupillary response, papilledema, decreased visual acuity, increased intraocular pressure, diplopia, and cranial nerve palsies.10 Extraocular movement abnormalities are expected in CST, owing to the pressure on the cranial nerves in the cavernous sinus. The abducens nerve (which normally abducts the eye) is frequently affected because of its central location in the cavernous sinus, causing a palsy or paralysis to develop that limits the affected side to a lateral gaze. The spread of swelling and other ocular abnormalities from one eye to the other within 24 to 48 hours is considered pathognomonic for CST. The outward signs develop as the infection travels from the affected side of the cavernous sinus through small veins to the contralateral sinus. Changes in mentation and decreased level of consciousness then follow because neurologic function is compromised. CST is usually diagnosed with the use of magnetic resonance imaging and requires early, aggressive treatment with antibiotics for a lengthy period. Any of these signs and symptoms should prompt transfer of the patient to an emergency department with intravenous antibiotics and specialty consultation. Mortality from CST is high, at 20% to 30%, even with appropriate medical treatment.9 For this reason, patients who present with NV or other infections in the danger triangle should be informed (or their parents or guardians should be informed) that worsening cellulitis symptoms or any ocular symptoms should be evaluated in an emergency department. 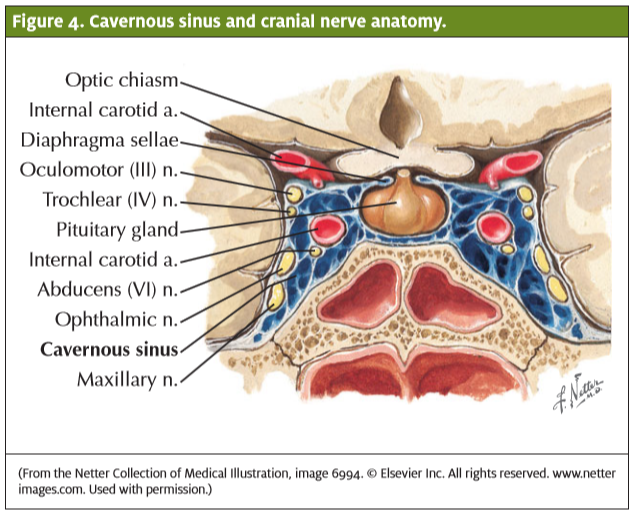 The chief treatment for NV is antibacterial ointment, applied twice daily for 5 days. Mupirocin is an excellent choice because it also treats MRSA. The ointment vehicle provides pain relief by moisturizing the area and softening crusts. Note that softening the crusts before removing them can decrease bleeding. Applying warm compresses several times a day is also recommended, which may help promote circulation to the area and speed healing. Any fluctuant tissue must incised and drained, although fluctuance is not common in NV. For severe manifestations or associated areas of cellulitis, oral antibiotics with appropriate coverage for S. aureus should be used. Our patient was prescribed mupirocin, and his condition cleared after a week, with no recurrence.

NV is a painful infection causing crusting inside the nares that can lead to serious sequelae if left untreated. The treatment of choice is topical mupirocin, which cures the infection and soothes the inflammation. The most serious complication of an infection like NV in the
danger triangle of the face is CST, a life-threatening infectious clotting condition. The most common signs of CST are a worsening headache and visual disturbances, especially cranial nerve palsies affecting the eyes. Prompt transfer to an emergency department is warranted if CST is a possibility.

We thank Paul J. Holman, MD, a neurosurgeon at Houston Methodist Hospital in Texas, for reviewing the portions of our manuscript about cavernous sinus thrombosis and cranial nerves.