Urgent message: Lisfranc dislocations are relatively rare, but should be on the urgent care provider’s radar in patients who refuse to bear weight and who have significant midfoot pain and swelling after an acute trauma causing hyperplantarflexion of the foot.

The tarsometatarsal (TMT), or Lisfranc, joint complex is the attachment between the forefoot and midfoot. This joint is the keystone to normal foot function and is thus critical for normal gait.1 Jacques L. Lisfranc was a French surgeon during the Napoleonic wars who described an injury to the midfoot that resulted when men fell from their horses while their feet were still stuck within the stirrup.1 In modern times, these injuries are caused by direct trauma (eg, a from heavy object) or indirect trauma (eg, in a high-energy motor vehicle accident) mechanisms. TMT joint complex injuries constitute <0.5% of all fractures and dislocations.2 Here, we describe the relatively rare Lisfranc fracture and dislocation in a young, otherwise healthy, individual.

A 44-year-old female with a history of hypertension presented to the urgent care with right foot and ankle pain which began after a motor vehicle collision earlier that day. The patient was the restrained driver travelling 40 mph when another vehicle pulled out in front of her. The airbags did not deploy. The patient was ambulatory on scene but found it increasingly painful to bear weight. She denied head injury or loss of consciousness.

The patient’s general exam was normal.

Examination of the right foot revealed moderate tenderness to palpation with soft tissue swelling and obvious deformity to the lateral aspect of the foot and ankle. Her foot was neurovascularly intact with normal dorsalis pedis pulses and a capillary refill of 2 seconds.

Radiographs revealed Lisfranc fracture dislocation with homolateral and dorsal dislocation of the first through fifth metatarsals, widening of the joint, and severe regional soft tissue swelling and edema. Punctate osseous fragments were noted in the region of the middle and lateral cuneiform, noted to likely relate to underlying fractures. No acute fracture or dislocation was found at the level of the right ankle. Ankle mortise alignment was anatomic. 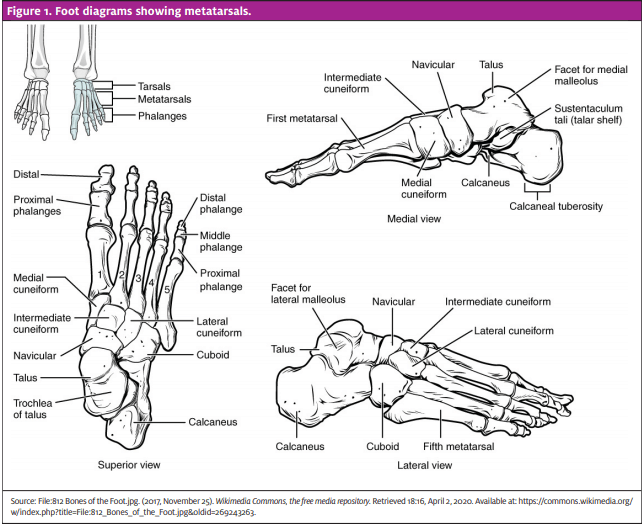 The patient was transferred to the emergency department where she underwent closed reduction and percutaneous pinning. The patient was discharged home in splint with walker and with postoperative orthopedic follow-up instructions

Lisfranc fracture dislocations make <0.2% of all fractures and are recognized to be more prevalent in males than females, though this is thought to be due to a greater tendency to be involved in high-energy sports.3 TMT joint complex injuries can result from direct and indirect forces including crush injuries and motor vehicle collisions. Most cases involve an individual whose foot is plantar-flexed and is subsequently bent forward, rotated, or crushed. In athletes, the mechanism often involves immobilization of the fore- and midfoot in conjunction with a varus or valgus force.4 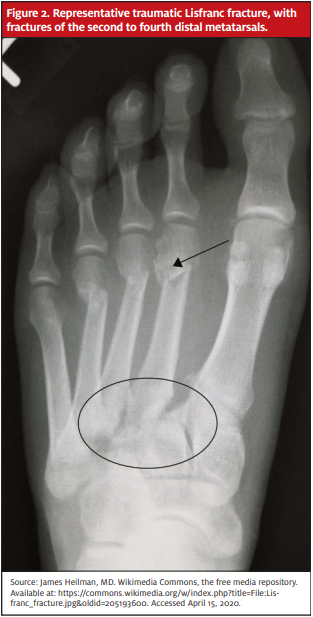 The anatomy of the TMT joint complex includes the five metatarsals and their articulation with the cuboid and the medial, middle, and lateral cuneiforms.5 The “Lisfranc ligament” is composed of the dorsal, plantar, and interosseous ligaments. There is no transverse ligament interconnecting the first and second metatarsals; thus, the first metatarsal is prone to displacement when the TMT joint complex is injured. Additionally, the dorsal ligaments of the joint are weak and thus dorsal displacement is more common.5

While these injuries are rare, they should be suspected in patients refusing to bear weight and with significant midfoot pain and swelling after an acute trauma causing hyperplantarflexion of the foot.4 Examination may reveal tenderness to palpation, swelling, and plantar ecchymosis in addition to other confirmatory tests. Weightbearing is typically painful and difficult initially, with limited range of motion secondary to pain especially with passive pronation and supination of the foot.4,5 Definitive diagnosis is made with imaging studies.

Malalignment of the medial borders of the intermediate cuneiform and second metatarsal on AP film, as well as of the medial borders of the fourth metatarsal and the cuboid on oblique film >2 mm are indicative of a Lisfranc injury.5 Radiographs may also reveal avulsion fracture, known as a “fleck-sign,” at insertion of the Lisfranc ligament, involving the medial cuneiform and second metatarsal.5 In some cases, non-weightbearing radiographs appear normal and weightbearing radiographs may be obtained.4 If patient’s presentation and examination are consistent with TMT injury despite negative radiographs, computed tomography and magnetic resonance imaging should be performed.3

Lisfranc fractures and dislocations can lead to chronic pain and disability if diagnosed late or left untreated4 and require emergent ED referral or evaluation and consultation with an orthopedic specialist.

Management of Lisfranc Dislocation in the Urgent Care Center