Urgent message: Kaposi sarcoma is considered an AIDS-defining illness with variable locations of presentation. Proper diagnosis of lesions can allow patients to seek out necessary care for potentially serious pathologies.

Skin lesions and abscesses are common and often relatively benign findings that a physician may not deem serious enough for further investigation. However, as first-line providers, it is critical for urgent care physicians to identify and biopsy any lesions that are irregular in appearance, location, or both, as they could be harbingers of serious disease. Here, we present the case of a 54-year-old man diagnosed with Kaposi sarcoma, which presented as a fungating mass on the plantar surface of his right foot.

A 54-year-old Hispanic male with no significant past medical history presented to the urgent care center with intermittent, radiating pain of the right lower foot of two weeks duration. He rated the pain at 7 on a 10-point scale. The patient reported that he initially noticed a rapidly enlarging black lesion on the bottom of his right foot with edema and erythema present. He also reported applying methylene blue to the lesion with no improvement. He is a construction worker and denied any injury or trauma to the extremity. He related that the pain was alleviated while wearing a shoe, and exacerbated when the shoe is off. He denied any fever, muscle cramps or spasms, swollen lymph nodes, shortness of breath, or chest pain, but admitted to bleeding that was controlled.

Vital signs and physical exam were unremarkable except for a 2 x 1.5 cm fungating mass on the plantar surface of the right foot. A pocket of demarcation was present between the mass and normal surrounding tissue, with approximately 0.5 cm of probable depth. Blue, artificially dyed skin surrounding the lesion and a small amount of purulent material were observed.

The differential for nodular skin lesions includes, but is not limited to:

The patient was prescribed cephalexin (Keflex) and bacitracin. A culture of the lesion was obtained via punch biopsy, which was performed in the urgent care center and sent to pathology. Pathology report of the biopsy returned with diagnosis of Kaposi sarcoma of the skin. An additional section stained with HHV8 was reviewed and supported the diagnosis. Histology reported a bland spindle cell proliferation around the superficial vascular and periadnexal plexuses with formation of slit-like spaces filled with extravasated erythrocytes. Scattered inflammatory infiltrate of lymphocytes and plasma cells were present.

The patient was contacted twice and informed that an urgent follow-up visit was advised regarding a potentially serious diagnosis. The patient declined both times and reported that he had an appointment with his primary care provider and a specialist. 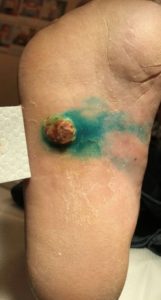 Figures 1. A lesion of Kaposi sarcoma on the plantar surface of the right foot; artificially dyed by methylene blue.

Kaposi sarcoma (KS) is an angioproliferative malignancy, which can further be sorted into four types based on the clinical conditions and presentation in which it arises. These four types include: classic; endemic; immunosuppressive (iatrogenic); and the most common, epidemic (AIDS-related) Kaposi sarcoma.1

The microscopic presentation is consistent between the four types of KS, displaying evidence of angiogenesis, inflammation, and spindle cell proliferation.2-4 There are many clinical variants of KS, including telangiectatic, ecchymotic, keloidal, hyperkeratotic, micronodular, pyogenic granuloma-like, and intravascular.2,5 These lesions can rupture, bleed, grow rapidly in size, or even remain unchanged for several years. If biopsied, the lesions can be processed through polymerase chain reaction to detect amplified human herpesvirus 8 (HHV-8) DNA sequences. Immunohistochemical staining can also be used to detect the presence of HHV-8 latent antigen within the spindle cells.4

Classic Kaposi sarcoma (CKS) is thought to be slower growing, arises in older men of the Mediterranean or Central/Eastern European population, and affects the distal extremities, mostly lower legs and feet.6 Endemic (African) KS is most commonly found in Central and Eastern Africa in those less than 40 years of age, including women and children. Factors such as malnutrition and malaria are thought to contribute to its development. CKS was the most common form of KS in Africa prior to the AIDS epidemic. Immunosuppressive (Iatrogenic) KS is found in renal allograft recipients, other transplant recipients, and those on immunosuppressant therapy. Cessation or lowered dosage of the immunosuppressive drugs often resolves or reduces the size of KS lesions.1,7

Epidemic (AIDS-associated) KS is the most common tumor arising in HIV-infected individuals and is considered an AIDS-defining illness by the Centers for Disease Control and Prevention. This disease has been found among all demographics associated with increased risk for HIV infection, most commonly homosexual or bisexual men. Although less common, epidemic KS may also be present in intravenous drug users and transfusion recipients. In these patients, the CD4 count plays an important factor in the incidence of KS.8,9

The cutaneous lesions of KS are aggressive and can be found most often on the lower extremities, face, oral mucosa, and genitalia.

Noncutaneous sites of disease most commonly include the oral cavity, gastrointestinal tract, and respiratory system.1

Due to our patient’s age, ethnicity, geographic location, and lack of any significant past medical history, epidemic KS was suspected. Urgent follow-up was highly recommended in order to determine if the patient was infected with AIDS, so he could receive the best care possible for his condition.

Physicians should also be aware of other dermatologic conditions associated with AIDS, including esophageal candidiasis, herpes simplex with chronic ulcerations, varicella zoster in a younger patient, seborrheic dermatitis, condyloma acuminata, oral hairy leukoplakia, molluscum contagiosum, psoriasis, and dermatophyte infections, among others. Any of these suspicious skin disorders warrant further investigation by the urgent care physician, as they could be signs of significant disease.

Physicians working in an urgent care setting are often the first-line providers for patients who may harbor potentially serious pathologies. Thus, good clinical judgment and relevant workup is essential in proper diagnosis, no matter the presenting complaint. Kaposi sarcoma is a serious disease, and as an AIDS-defining illness it should lead the urgent care provider to seek out further workup and proper follow-up.

AIDS is a treatable, but fatal, condition; therefore, the presentation of irregular-appearing lesions on the skin should always be appropriately investigated (as highlighted by this case, when the initial manifestation of KS arose on the plantar surface of the foot). Prompt and accurate diagnosis allows the potentially AIDS-infected patient to seek out further diagnosis and treatment crucial to improving both duration and quality of life.