Urgent message: The differential diagnosis is broad for patients presenting with chest trauma. Bedside ultrasound can expedite critical diagnoses and intervention(s) when pneumothorax is in the differential.

A 12-year-old male rolled an all-terrain vehicle (ATV) in the woods, sustaining head, torso, and extremity injuries. He was helmeted, but lost consciousness for an uncertain amount of time. His father found him and provided initial care at home. Because of persistent headache and vomiting, his father brought him to a local urgent care facility several hours later. In addition to the headache and vomiting, he reported some chest pain, abdominal pain, and leg pain. The child had no relevant past medical history or known drug allergies.

The patient was alert and interactive on arrival, with a Glasgow Coma Scale (GCS) of 15. There were no facial injuries or extremity deformities evident. Cranial nerve examination was normal. The cervical spine had no bony tenderness and normal range of motion. He had multiple abrasions to the left occiput, left flank, and posterior left knee. Breath sounds were clear bilaterally. The abdomen was tender with guarding in the upper quadrants, was not distended, and there was no abdominal ecchymoses. He was able ambulate with a normal gait.

The patient’s primary survey was reassuring. C-spine was cleared based upon clinical exam. However, the abdominal exam raised concern for solid organ injury. While awaiting emergency medical transport services, the urgent care clinician conducted a brief point-of-care ultrasound (POCUS) to evaluate for pneumothorax (PTX), given evidence of torso injury, as suggested in the Advanced Trauma Life Support (ATLS) guidelines.

A shimmering hyperechoic line bordered by ribs was appreciated at each lung apex. Lung sliding was noted bilaterally, indicating the visceral and parietal pleura were gliding against each other. Based upon these findings, PTX was thought to be unlikely.

The patient was transported via EMS to the nearest pediatric trauma center. His FAST exam and CT head were both negative. Given the severity of concussion, he was admitted for observation and had an uneventful stay. He was discharged the following day.

Chest injury is among the most common causes of trauma-related deaths, preceded only by head and abdominal injury.1 Bedside ultrasound assessment in trauma is a validated extension of the physical exam and can offer immediate answers to specific, important questions such as: Is there a pneumothorax? Is there fluid in the chest cavity? Is there a pericardial effusion or tamponade? Is there free fluid in the abdomen?

This discussion highlights the benefits of POCUS when evaluating for PTX. It has been reported that one in five major traumas has an associated PTX. Rapid identification and treatment of PTX can be lifesaving.2 While the urgent care clinician may be well versed in treating minor injuries, major injuries can present a challenge in terms of prioritizing assessments and intervention. An injured patient who is in severe pain can easily distract a clinician from careful assessment of the ABCs. The use of POCUS can allow for expedited identification of PTX who may be otherwise difficult to assess due to pain/anxiety.3

A bedside ultrasound evaluation for PTX can be done in a matter of seconds. Lung POCUS can be conducted with the patient supine or sitting. To conduct a PTX ultrasound exam, follow these steps on each side of the chest:

A “lung point” is when the ultrasound image captures both the presence of static and dynamic lung activity at the pleural line, signifying where the dynamic visceral pleura separates from the static parietal pleura. The “lung point” is the only definitive finding for PTX, but is rarely identifiable. 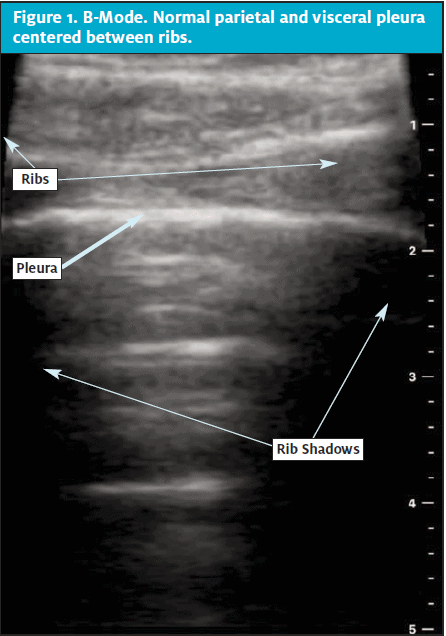 In addition to assessment for traumatic PTX, thoracic POCUS can be used when assessing for spontaneous PTX (SPTX). In adult males, the incidence of SPTX is approximately six times greater than in women. Among children, SPTX is more common in males as well, peaking in the adolescent years.4 Thin men are believed to be predisposed to SPTX due to increased transpulmonary pressures at lung apices. In addition, the rapid growth of these young men can cause relative ischemia in the pulmonary vasculature leading to bleb formation.5 The presence of lung blebs further increases the risk of SPTX.

POCUS vs chest x-ray (CXR) in evaluation of pneumothorax

The benefits of POCUS include cost effectiveness, convenience of use, and lack of ionizing radiation. This is especially valuable for the pediatric population, in whom limiting radiation exposure is particularly desirable.

In the setting of blunt chest trauma, thoracic ultrasound is superior to CXR when identifying PTX. 3,7 Lung sliding is the only criteria necessary to rule out PTX on ultrasound. Lung sliding is the dynamic visualization of air movement at the pleural line in standard B-mode on ultrasound. In M-mode, a still image easily portrays the difference between aerated lungs and PTX. “Sandy beach” is the term used to describe the appearance of dynamic lung tissue under the static soft tissue of the chest wall. Normal lung sliding is depicted in Figure 2A. Conversely, “barcode sign” is the term used to describe the lack of movement as seen in Figure 2B. 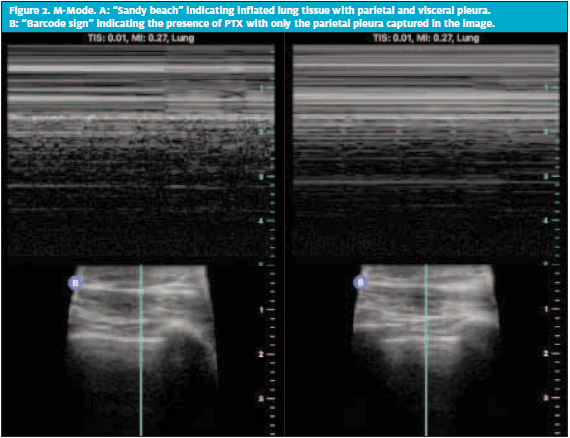 There is a robust body of literature confirming the value of POCUS when evaluating for PTX. A 2010 review of four prospective observational studies compared POCUS with CXR in the evaluation of 606 patients with suspected PTX after blunt trauma. The sensitivity of ultrasound was 86% to 98% and specificity was 97% to 100% for detecting PTX. In contrast, the CXR had 100% specificity but sensitivity ranged from 28% to 75%.3

A 2018 Cochrane Review of 34 studies including 8,635 patients determined that overall specificity of POCUS for detecting PTX was 99% in adults and 91% in children. The sensitivity was 96% overall—however, importantly, only 62% in the pediatric population. They cautioned that a negative POCUS does not rule out PTX in children and that clinical suspicion must still be maintained.6

In a 2014 meta-analysis, thoracic ultrasound was shown to have a higher diagnostic accuracy compared with CXR for detection of PTX. This analysis evaluated 65 separate studies involving more than 5,000 patients who had thoracic POCUS performed by emergency physicians. Findings included a higher sensitivity in the diagnosis of PTX compared with CXR. They postulated that some of the improved sensitivity may have been related to the clinician’s familiarity of the mechanism of injury and the patient’s clinical condition.7

Following the diagnosis of PTX, needle decompression in urgent care while awaiting EMS can be considered if the patient is in extremis. As an extension of the physical exam, thoracic POCUS is an easy to learn exam which can facilitate the evaluation for PTX among UC patients. 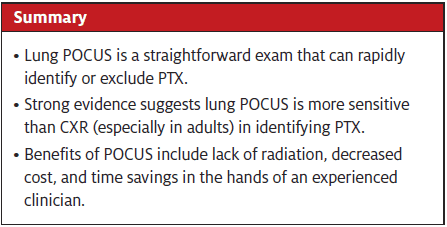