Urgent message: Cat scratch disease caused by the bacteria Bartonella henselae typically presents as isolated lymphadenopathy in the region draining the inoculation site (cat scratch or saliva), as well as systemic symptoms such as a fever and malaise. In otherwise healthy people, oculoglandular symptoms are occasionally seen as a complicated presentation. CSD should be included in the differential diagnosis of these symptoms.

A 46-year-old man complained of a 5-day history of fever, chills, fatigue, left eye pain, eye redness, eye tearing, and photophobia. The patient stated he was taking over-the-counter cold medicine for his symptoms with no relief. The patient had no significant past medical or surgical history.

Vital signs were normal except for a temperature of 101.6° F. Upon physical examination, neck was supple but there was severe left preauricular tenderness with approximately 5 cm of swelling. The left conjunctiva was injected and erythematous. Pupils were equal, round, and reactive to light. There was no proptosis, extraocular movements were intact, and there were no painful eye movements. Visual acuity was 20/40 bilaterally. Healing scratches to the right forearm (contralateral) were observed. There was no axillary lymphadenopathy.

When questioned about the scratches to the right forearm, the patient stated they were caused by his kitten. The patient stated he had allowed his kitten to lick his face while playing about a week ago. His symptoms started 2 days after the licking incident. The patient was sent to the emergency department to confirm the initial diagnostic impression of cat scratch disease. There, he was started on intravenous antibiotics and discharged with a prescription for azithromycin (500 mg PO QD on Day 1, then 250 mg PO QD for Days 2-5). Follow-up with an ophthalmologist a week later showed improvement in physical examination and reduced preauricular lymphadenopathy. One-month follow-up confirmed resolution of all symptoms.

Cat scratch disease (CSD) is caused by the gram-negative intracellular bacteria Bartonella henselae. Cats are the major reservoir for the bacteria, with transmission between cats occurring via the arthropod vector Ctenocephalides felis (cat flea). The bacteria can be transmitted to humans via a cat scratch or cat saliva. CSD typically presents as isolated lymphadenopathy in the region draining the inoculation site with systemic symptoms such as a fever and malaise. Atypical presentation of CSD occurs in approximately 5% to 14% of cases, with Parinaud oculoglandular syndrome (POS) being a major complication.1 Typical symptoms of POS include foreign body sensation in the eye, unilateral eye redness, increased tear production, and regional lymphadenopathy which affect either the preauricular, submandibular, or cervical lymph nodes.2 (See Figure 1.)

The definitive diagnosis of CSD remains difficult and is usually made on a clinical presentation. Serological testing with enzyme immunoassay or indirect fluorescence assay can be used in efforts to confirm clinical symptoms2; however, there are shortcomings with these tests, as several studies revealed poor sensitivities and specificities.3,4 CSD is often self-limiting, and symptoms typically resolve in 2-4 weeks. However, there’s evidence that suggests azithromycin helps the rate of decreasing lymph node size.1 In complicated cases of CSD with central nervous system involvement, a combination therapy of doxycycline (100 mg PO or IV twice daily) with rifampin (300 mg PO twice daily) for 4–6 weeks has been successful.5,6 The immunocompromised population needs even more attention with ocular involvement with CSD; there is evidence of disease progression if diagnosis and treatment are delayed.7,8

Although there was no serological testing to confirm diagnosis in this case, the history of present illness, clinical symptoms, and improvement with azithromycin as the antibiotic therapy are suggestive of POS as atypical presentation of cat scratch disease. We postulate that the symptoms were caused by direct saliva contact with the patient’s face rather than as a hematogenous spread of the cat scratch on his contralateral arm. 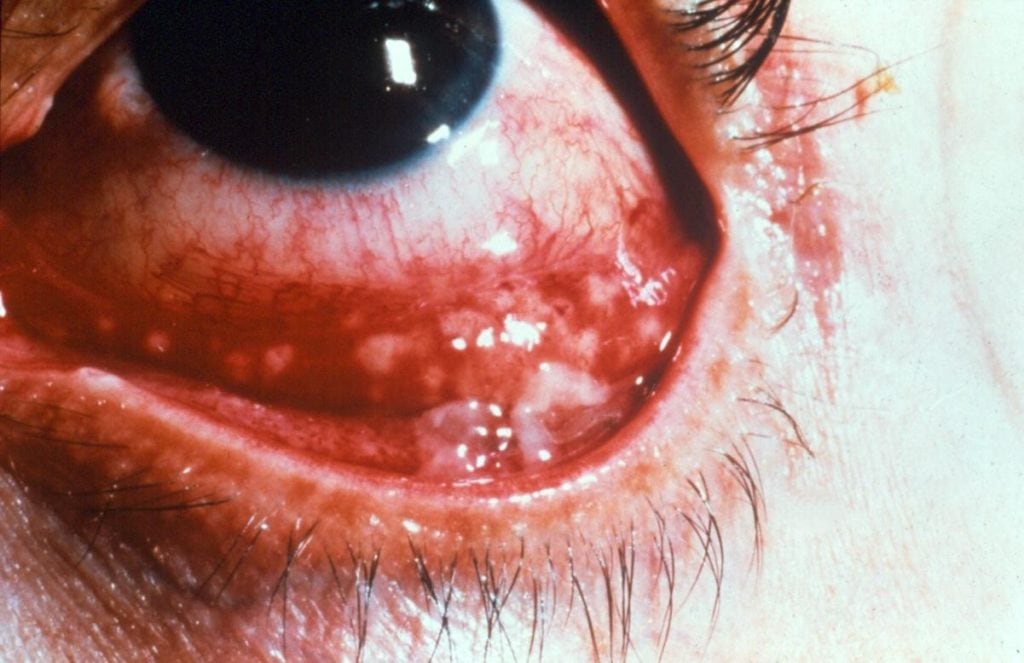 Image of a patient with Parinaud oculoglandular syndrome.10 (© 2018 American Academy of Ophthalmology)

It is important to identify the etiology of isolated eye pain, eye redness, photophobia, fever, and facial swelling/lymphadenopathy as there are different treatments and disease progression.

The differential diagnoses include the following:

Orbital cellulitis is an infection of orbital contents, posterior to the orbital septum, which can cause loss of vision and loss of life in extreme cases.11,12 Symptoms may include ocular pain, eyelid swelling and erythema, chemosis, opthalmoplegia, pain with eye movements, and proptosis. Typically, orbital cellulitis is associated with a preceding sinusitis that spreads from perforations of the adjacent ethmoid sinuses. The most common bacterial agents are Staphylococcus aureus, Streptococcus pneumonia, Streptococcus anginosus, and Streptococcus pyogenes.13-15 Bacterial cultures are especially hard to obtain unless surgical intervention is indicated. Imaging modalities such as a CT scan can be utilized to identify the source of the inflammation. Antibiotic treatment for orbital cellulitis includes vancomycin plus ceftriaxone or cefotaxime.

Periorbital cellulitis (often called preseptal cellulitis) is an infection of the eyelid and contents anterior to the orbital septum. Symptoms include unilateral ocular pain, eyelid swelling and erythema, and, occasionally, chemosis; it is often confused with orbital cellulitis, though there is usually no associated opthalmoplegia, pain with eye movement, or proptosis. Causes include spread from a surrounding sinusitis or local trauma to the eyelids.13,16 The identification of the bacteria causing the infection is difficult because blood cultures are usually negative, and cultures are not possible unless there is a lesion.17 Recommended treatment includes a combination of trimethoprim-sulfamethoxazole or clindamycin plus amoxicillin or amoxicillin-clavulanic acid or cefpodoxime, or cefdinir.

Acute angle glaucoma, uveitis, and corneal abrasions will present with an isolated red eye and ocular pain as well, but usually do not affect surrounding tissue.

The features that made the diagnosis of CSD more likely were the presence of prominent regional lymphadenopathy and a history of exposure to cats in conjunction with a unilateral red eye.

In patients presenting with unilateral oculoglandular symptoms, clinicians should have a high suspicion of a Bartonella henselae infection.