Urgent message: A growing body of evidence suggests increased cardiovascular risk with frequent cannabis use. With cannabis availability and legalization increasing, the urgent care provider must understand how it affects the risk for acute medical issues among frequent users.

Cannabis, or marijuana, is legal for recreational use in 11 states and medical use in 33 states.1 With this increasing availability and legalization, the urgent care clinician must understand its implications on the health of users.

Cannabis sativa is a flowering plant native to Central Asia. The female plant produces leaves, buds, and resin containing high amounts of delta-9-tetrahydrocannabinol (THC), the primary active ingredient in cannabis as well as hundreds of other chemicals related to THC (collectively referred to as cannabinoids).2 Cannabis use has established effects on the central nervous system, gastrointestinal system, and cardiovascular system. It is known to cause tachycardia, hypertension when supine, dysrhythmias, and postural hypotension.3 A growing body of evidence exists suggesting increased risk of coronary events with frequent cannabis use.4-7 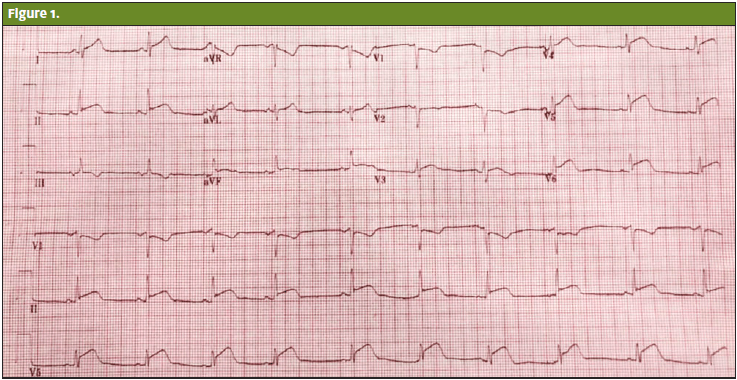 A 32-year-old female presented with a chief complaint of nausea and vomiting. Vomiting began yesterday with gradual onset, nonradiating chest discomfort over the course of 24 hours. She also described anxiety and felt that she may have been experiencing a panic attack. Her past medical history was notable for anxiety, asthma, and daily marijuana use. The patient had no history of hypertension, hyperlipidemia, or family history of premature coronary artery disease (CAD). Furthermore, she was not obese and did not smoke tobacco. On presentation, her vital signs were 97.4⁰F, heart rate 75, respiratory rate 16, blood pressure 146/101, and oxygen saturation 98% on room air.

The differential diagnosis of this patient’s presentation includes, but is not limited to, acute coronary syndrome (ACS), pulmonary embolism, aortic dissection, gastroesophageal reflux disease (GERD), pneumothorax, and anxiety/panic attack. She did not have common risk factors (hypertension, hyperlipidemia, family history, tobacco smoker, or age) for ACS or common risk factors for pulmonary embolism (malignancy, prolonged travel, oral contraceptive use, or recent surgeries). Aortic dissection is less likely in individuals without previous known connective tissue disorders, chronic hypertension, or vascular disease. GERD is a possibility, but worsening pain is unusual and raises concern for another pathology. Spontaneous pneumothorax is possible and is typically associated with trauma or, in rare cases, menstrual cycles. And anxiety, while also a possibility, is a diagnosis of exclusion. Given the large differential diagnosis, the patient underwent a work-up including chest x-ray and electrocardiogram.

The ECG (Figure 1) revealed elevation in the inferolateral leads (II, III, AVF, and most prominent in V4-6) consistent with an anterior ST elevation myocardial infarction (STEMI). The chest x-ray showed a normal cardiac silhouette without mediastinal widening, pneumothorax, or pulmonary consolidation. Per facility protocol, she was given aspirin, ticagrelor, sublingual nitroglycerin, and a heparin bolus. The patient was then transferred to the hospital cardiac catheterization suite.

Her initial laboratory work showed a WBC of 12, hemoglobin 15.3, and platelets 422. Lipid panel after hospital admission revealed total cholesterol 171, HDL 36, LDL 119, triglycerides 79. Urine drug screen was positive for alprazolam, lorazepam, and THC. Her initial troponin was 0.05; after 3 hours it was 5.98.

In the catheterization suite, she was found to have 99% left anterior descending coronary artery (LAD) occlusion with plaque rupture involving the diagonal branch. A drug-eluting stent was placed, and she was admitted to the hospital.

Transthoracic echocardiogram showed an ejection fraction of 49% with apical regional wall abnormality and normal right ventricle chamber size. As this patient had no classic risk factors for CAD, the managing cardiology team concluded that her daily marijuana use was the most likely causative factor for her myocardial infarction.

This case illustrates and adds to a growing body of literature documenting cannabis-related coronary events in young patients without other cardiac risk factors. A number of mechanisms have been proposed to explain the increased risk of ACS associated with cannabis use; however, the exact pathophysiology of this relationship remains unknown.

One theory suggests that activation of CB1 and CB2 receptors on the platelet cell membrane leads to a concentration-dependent increase in expression of glycoprotein IIb-IIIa and P selectin.9 These proteins are responsible for the final pathway of platelet aggregation and likely create a prothrombotic state in otherwise healthy cannabis users. Sugamura, et al found reduction in atherosclerosis in an animal model receiving cannabinoid receptor antagonists.10 This has potential for extrapolation to suggest increased atherogenesis with CB1 agonism, though further studies are needed. Hypertension when supine and postural hypotension are known cardiovascular effects of cannabis and may precipitate angina in moderate- or higher-risk individuals. Smoking cannabis may also transiently increase carboxyhemoglobin levels, leading to decreased oxygen transport to the heart. Mittleman, et al found a 4.8-fold increased risk of ACS in marijuana users 60 minutes after use compared with nonusers. This risk rapidly declined in the second hour following use, suggesting only a temporary increase in cardiovascular risk that was less severe than that associated with cocaine.11

Further studies are certainly needed to determine the underlying pathophysiologic mechanisms and temporal relationship to marijuana use. Nonetheless, based on current evidence, it is prudent to consider regular marijuana use to be a risk factor for coronary events, especially in patients with a presentation consistent with ACS, and to counsel patients who use marijuana regularly accordingly.

Cannabis-Associated Myocardial Infarction in a Young Woman Without Other Cardiac Risk Factors
Share this !