Urgent message: Toddler’s fractures are a common cause of limp and failure to bear weight in children under 4 years of age. Recent research shows wide variation in management of these stable fractures, favoring a less conservative approach.

The case: A 14-month-old male is brought to your urgent care by his parents immediately after an injury to his right leg at the park. The boy was riding down the slide on his father’s lap, when his foot got caught, twisting his right lower leg. He cried in pain, and now is refusing to bear weight. On examination with the child calm, both legs are well perfused with no swelling or obvious deformity. Examination of the right leg shows full range of motion at the hip, knee, and ankle. There is no thigh or foot tenderness. Warmth and tenderness are noted to the right lower leg. Radiographs of the right leg show no fracture.

The “toddler’s fracture” was first described in 1964 by Dunbar, et al, as an oblique, nondisplaced fracture of the distal tibial shaft in children between the ages of 9 months and 3 years, which can frequently go undiagnosed due to challenges with examination and subtle or lack of findings on initial radiographs.1 The original definition has been expanded to include subtle or occult fractures in the lower limb of preschool-aged children following minor trauma.2 Recent research has focused on management and follow-up.

Figures 1a and 1b. Acute oblique fracture of lower tibial shaft in a 2-year-old. 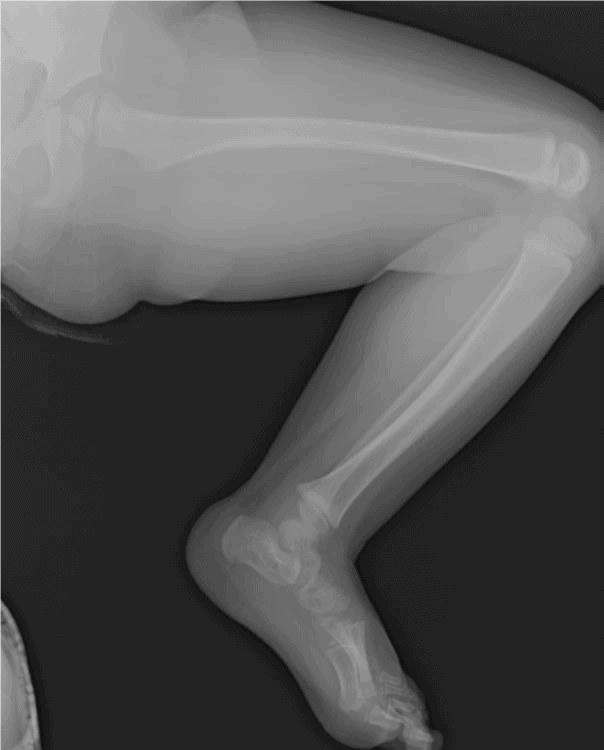 Children with toddler’s fractures typically present with limp or failure to bear weight on an extremity after minor trauma, such as tripping or falling a short distance. The mechanism usually suggests rotational force through the tibia with the foot and ankle fixed. Riding down slides on another person’s lap has been shown to be a risk factor for injuries of the lower leg, including toddler’s fractures.3 Occasionally, no history of trauma is elicited, but onset of symptoms should be acute. History of subacute, or insidious onset of extremity pain or limp should broaden the differential to include inflammatory disorders or malignancy.

In addition to potential mechanism or trauma, the history should include inquiry into systemic symptoms (including fever, which are absent in the case of toddler’s fracture). A patient with fever and limp or refusal to bear weight raises suspicion for infectious etiology; prompt recognition of conditions such as septic arthritis, osteomyelitis, and myositis is critical. A history of recent illness or antibiotic use may point toward a post infectious etiology, such as transient synovitis.

Examination may be challenging due to the distress of the child and the relatively subtle physical findings. As with all patients with suspected trauma, the extremities should be inspected for deformity, erythema, or swelling. Neurovascular status should be evaluated by checking distal pulses and capillary refill, and assessing movement.

Patients may feel more comfortable positioned in their caregiver’s lap, and if the provider begins the exam with the unaffected side. A longstanding recommended approach to the exam is to begin by testing the skin temperature of the lower legs.1 Warmth over the anterior surface of the lower leg is a common finding with toddler’s fractures, thought to be due to subperiosteal hematoma formation at the fracture site.2 If toddler’s fracture is suspected, exam of the affected extremity may begin with palpation of the hip, thigh, and knee, followed by the foot and ankle, and finally the lower leg.

Patients with toddler’s fracture may exhibit tenderness over the lower third of the tibial shaft, or may have pain with passive dorsiflexion of the foot or gentle twisting of the tibia by rotating the foot while holding the knee stable. Range of motion at the ankle, knee, and hip is typically normal.

A complete physical exam in patients with unclear cause of limp may reveal an etiology outside the musculoskeletal system, such as inguinal hernia, testicular torsion, or appendicitis. Providers should maintain vigilance for potential nonaccidental trauma by examining the patient for other suspicious or unexplained injuries. Because toddler’s fracture can result from minor trauma, patients will sometimes present without history of a specific mechanism of injury. However, a mechanism that is not consistent with exam findings or the developmental ability of the child should raise suspicion for nonaccidental trauma.

The consequences of a missed diagnosis of an infection, neoplasm, or nonaccidental trauma can be dire in children. Sequelae such as systemic sepsis, cartilage and growth plate damage, future growth disturbance, clinical worsening or metastasis of malignancy, and risk of future nonaccidental trauma highlight the importance of a careful history and physical exam in evaluating these patients.

On plain film, toddler’s fractures are classically described as a spiral or oblique fracture through the distal third of the tibia. Initial radiographs are frequently negative, but a follow-up film 1-2 weeks after presentation will often confirm a fracture by revealing periosteal reaction and signs of fracture healing. In their 2001 study, Halsey, et al reported 66% of patients diagnosed with toddler’s fracture had negative initial radiographs; and 41% of those presumed cases showed radiographic evidence of fracture at follow-up.4 In a larger, more recent study, 39% of patients had negative initial x-rays, with 93% of these showing evidence of fracture at follow-up.5 Though not routinely used, an internal oblique view may be obtained to better visualize subtle findings.6

Ultrasound has shown promise in identifying toddler’s fractures through detection of the fracture hematoma, even in cases in which the initial radiographs are negative.2 Increased use of ultrasound in the pediatric emergency room (PED) and urgent care setting may allow for earlier detection of these fractures while minimizing radiation exposure in pediatric patients.

While spiral fractures of long bones raise clinicians’ suspicion for child abuse, evidence suggests that these fractures in the distal tibia commonly occur due to accidents and childhood injury.7 Spiral fractures of the midshaft tibia are more suspicious for nonaccidental trauma.8

Seguin, et al surveyed physicians at 15 Canadian hospitals and found significant nationwide variation among immobilization with above knee circumferential casting, below knee circumferential casting, below knee posterior splinting, other treatment, and no immobilization.10 The same study showed physicians were more likely to immobilize a radiographically confirmed fracture compared with a suspected case, and that when immobilization was utilized, physicians were more likely to manage confirmed fractures conservatively with above-the-knee circumferential casting, while below knee splinting was most common in suspected cases.10 Similarly, a retrospective cohort study of patients 9-36 months age in a Scottish PED found children with a confirmed toddler’s fracture were more likely to be casted (92%), compared with those with presumed toddler’s fractures (47%).11

Figures 2a and 2b. Acute oblique/spiral fracture of the lower tibial shaft in a 13-month-old child. 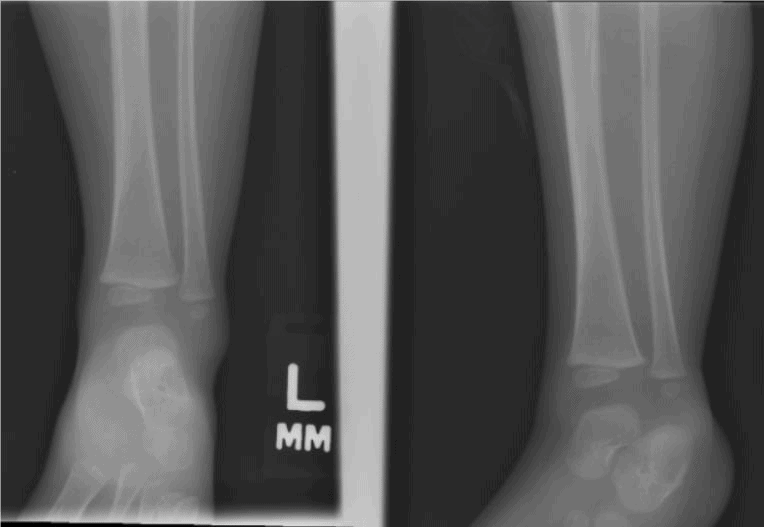 Prognosis of toddler’s fractures is good, regardless of management strategy. Recent studies have not noted any complications such as displacement, nonunion, or refracture.5,9,11,12 Skin breakdown as a result of splinting or casting has been noted as a potential complication, with as many as 17.3% of patients affected in one study.9 This finding, along with similar healing times regardless of management, has led experts to recommend the use of CAM boots, or no immobilization at all,9 or to base immobilization method on the patient’s comfort and parent preference.11 Adamich and Camp recommend above-knee immobilization in younger toddlers to prevent slipping of below-knee immobilization that can occur on their short, conical legs, causing skin breakdown. They recommend below-knee immobilization such as CAM boots in older toddlers.12 A 2017 study showed reliable healing of toddler’s fractures by 3-4 weeks, with significant earlier return to weightbearing if initial immobilization was with a CAM boot, rather than a short leg cast.5

When faced with pediatric patients presenting with acute-onset limp or failure to bear weight, urgent care providers should consider the diagnosis of toddler’s fracture in those who demonstrate warmth or tenderness to the distal tibia, even if no evidence of fracture is seen on x-ray. As these are stable fractures with low likelihood of complications, immobilization strategy can be tailored to the patient and available materials; evidence suggests CAM boots may provide some protection from skin breakdown and faster return to weightbearing, especially in older toddlers. Follow-up with the primary care provider should be encouraged, with anticipation of immobilization for 3-4 weeks. Persistent pain or limp after this point may warrant further evaluation. 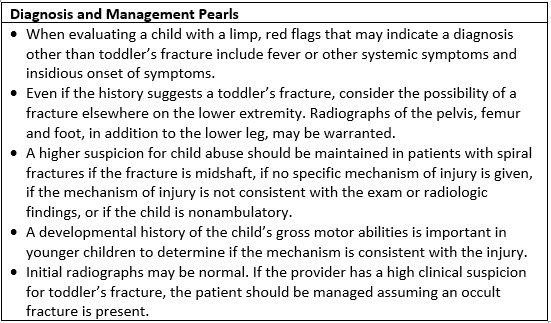 The need for routine orthopedic follow-up and repeat radiographs for patients with toddler’s fractures has also been called into question. Studies have cited the need to minimize children’s exposure to radiation, suggesting follow-up radiographs are unlikely to change clinical management, particularly in cases of radiographically confirmed toddler’s fractures.5,11,12 In response to a retrospective review showing uncomplicated healing of all toddler’s fractures with <2 mm displacement, orthopedists at The Hospital for Sick Children developed a clinical pathway which guides definitive management at initial point of care, and avoids repeat x-rays and orthopedic follow-up in patients with confirmed toddler’s fractures. By instructing primary care providers on exclusion criteria and immobilization and educating parents on splint removal, they aim to decrease cost to the family and the healthcare system.12

Case conclusion: The patient is presumed to have a toddler’s fracture and is placed in a posterior long leg splint; the parents are instructed to follow up with orthopedics in 1 week. A repeat radiograph obtained at follow-up demonstrates subperiosteal new bone formation of the distal tibia, providing evidence of a toddler’s fracture. He is placed in a CAM boot to complete 4 weeks of immobilization.