Urgent message: Absence of an obvious cause of symptoms should not mislead the clinician away from the likely diagnosis based on those symptoms. In this case, for example, the patient was ultimately diagnosed with a symptomatic chronic subdural hematoma associated with repetitive straining secondary to cough and constipation.

Chronic subdural hematoma (CSDH) is an encapsulated collection of old blood in the space between the arachnoid membrane and the dura. It was first described by Virchow in 1857 as “pachymeningitis haemorrhagica interna.” Symptoms present insidiously weeks to months after the initial insult as headache, confusion, lethargy, and weakness.

The pathophysiology involves rupture of bridging veins, which traverse the subdural space. In contrast to acute subdural hematoma (ASDH), in which direct head trauma is nearly always the cause, CSDH is caused by direct head trauma only 50%-70% of the time. Sometimes, the trauma is so trivial that it is forgotten. Other common causes of CSDH include falls without hitting the head, vascular malformations, coagulopathy, chronic alcoholism, and epilepsy.1

In addition to trauma, several less common etiologies have become recognized; these include coughing, sneezing, constipation, weight-lifting, blowing into instruments, and amusement park rides.2-8,9-17 We present a case of CSDH, which we believe was caused by repeated coughing and constipation. We aim to draw the primary provider’s attention to the signs, symptoms, and clues that would lead to increased clinical suspicion, early recognition, and prompt management of CSDH.

A previously healthy 65-year-old male presented to the urgent care with a 1-week history of headache which was gradual in onset, frontal and midline in location, rated a 7/10 pain at its worst, intermittent, and had associated mild posterior neck stiffness. The patient tried naproxen without relief. There was no recent or remote history of trauma and no history of similar past headaches. He denied fever, chills, nausea, photophobia, numbness, weakness, visual changes, or confusion.

Past history included type 2 diabetes, hypertension, and hyperlipidemia; all were reported to be well controlled. Medications include metformin, sitagliptin, canagliflozin, lisinopril, atorvastatin, and aspirin. The patient is married and works full-time as a dentist. He does not smoke, rarely consumes alcohol, and denies illicit drug use. Review of systems revealed chronic coughing fits and a 2-month history of constipation with significant straining at stool. The cough, which the patient attributed to lisinopril, is dry, comes in spells, and while present for years, has noticeably worsened recently. Physical exam was unremarkable except for a BP of 173/75. No diagnostic tests were obtained, and the patient was discharged home after symptomatic treatment.

Concerning features of a serious headache include sudden onset, age over 50, bleeding disorders/anticoagulation, hypercoagulable states, immunosuppression, no history of similar headaches, and a headache associated with exertion.18 Age over 50 is an independent risk factor for serious pathology among patients with nontraumatic headaches, and thus warrants particular concern as there is approximately four times the rate of pathology compared with younger patients.18,19 Up to 20% of all patients with intracranial hemorrhages are on anticoagulant medications.18 In a large observational study of 10,010 patients with subdural hematoma, 47% were on an antithrombotic agent. While vitamin K antagonists and direct oral anticoagulants conferred the greatest risk among this population, antiplatelet agents still demonstrated a small risk.20

Revisiting the case, our patient has a number of these risk factors. He’s over 50, has never had a similar headache previously, takes aspirin, and the headache is possibly associated with exertion. At this point, what’s the next best step? The American College of Radiology recommends neuroimaging for any new nontraumatic headache in a patient over 50 and for any nontraumatic headache associated with cough, exertion, or sexual activity.19 A normal neurologic exam cannot reliably rule out serious intracranial pathology.21 Nonetheless, there are currently no clear and widely agreed-upon guidelines for the use of neuroimaging in the workup of headache. Physicians must use sound clinical judgement and available resources in attempting  to identify the underlying cause.

Over the ensuing 4 days, the patient developed progressive imbalance, nausea, confusion, and urinary incontinence, prompting a visit to the emergency room. On exam, he was found to have:

The patient was lethargic and oriented only to person. On exam, there were no focal neurological deficits. Laboratory data, including coagulation studies, were normal. Chest x-ray was normal. Noncontrast CT of the head showed a thick hypodense subdural collection in the left frontal lobe with significant midline shift (Figure 1), consistent with a chronic subdural hematoma. He developed left-sided hemiparesis over the next hour and was taken to the OR for urgent subdural evacuation. The patient underwent successful burr hole craniotomy with a dramatic return to baseline neurological status. CTA of the head and neck prior to discharge did not reveal an arteriovenous malformation (AVM). 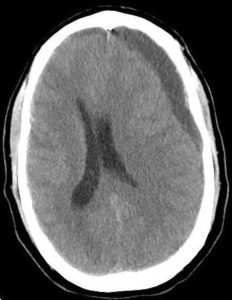 In 1971, Talalla et al introduced the concept of “spontaneous” subdural hematoma (ie, occurring in the absence of direct head trauma) in a series of case reports, describing a 61-year-old male with a history of chronic bronchitis who presented to the ED with 2 months of recurrent headaches and lethargy.2 There was no history of head trauma. Angiography revealed a subdural hematoma, and despite surgical management, the patient died 16 days later. Postmortem examination revealed no AVM. It was hypothesized that the etiology was chronic cough.2 Since then, coughing, sneezing, and heavy lifting have all been implicated in the development of CSDH in case reports.3,4 Blowing into instruments has also caused CSDH, with descriptions of patients who presented to the ED with multiweek histories of atraumatic headache: a 37-year-old male saxophone player and a 14-year-old female flute player with CT scan revealing CSDH and a negative workup for coagulopathy or vascular malformations; both patients stated that they had increased the use of their instruments over the preceding weeks.5,6

These cases share a common feature: use of the Valsalva maneuver. Coughing, sneezing, straining with defecation, heavy lifting, and blowing into a musical instrument all involve a forceable exhalation against a closed glottis, causing substantial increases in intrathoracic pressure (ITP) which results in increased central venous pressure, ultimately impeding cerebral venous outflow via the jugular venous system.7 As a result, sudden and sustained increases in pressure transmitted through the fragile bridging veins may be responsible for their rupture. In fact, noninvasive measurements have identified significant rises in intraocular pressure in wind instrument musicians, reflecting increased cerebral intravenous pressure.5,8

Nontraumatic CSDH may also occur as the result of rapid or repetitive head movements. These types of injuries are most frequently associated with physical activity and amusement park rides. In 1964 neurosurgeon William German, while riding the “Bobsled” with his two grandchildren at Disneyland, felt a dull thud in his head. His immediate thought was “Wouldn’t it be silly if I got a subdural hematoma from this?” Ironically, after experiencing intermittent headaches over the ensuing weeks, the diagnosis of CSDH was confirmed. He later hypothesized that the high angular acceleration he was subjected to was responsible for his bleed.22

Since then, there have been eight confirmed cases of CSDH after riding rollercoasters; five occurred in otherwise healthy patients9-13 and the remaining three had comorbidities which likely contributed to their bleed: a 77-year-old male on warfarin, a 33-year-old female with arachnoid cysts, and a 20-year-old male with subdural hygromas.14-16

In 2016, a 55-year-old otherwise healthy male presented with a CSDH after intermittent headaches which began after riding a centrifuge motion simulator ride 8 months earlier.17 Other activities suspected causes of CSDH including race walking,23 capoeira (a combination of dance and acrobatics),27 head-banging (violently shaking one’s head to the beat of music),24,25 and “reverse” bungee jumping (in which the subject is held at ground level then catapulted upwards).26 All share an element of rapid, jarring, or forceful repetitive movements of the head, potentially leading to tissue strain and shearing forces on the bridging veins.27 Rotational acceleration, as seen in rollercoasters, can cause very rapid deformations in the brain, which can lead to diffuse axonal injury, tissue tears, and vascular disruptions.10 A similar mechanism of injury is likely responsible for SH from whiplash injuries, falls without hitting the head, epilepsy, and shaken baby syndrome.1,28,29

High altitude has also been associated with CSDH. In 2002, a 37-year-old man was diagnosed with an atraumatic CSDH after attending a disco party at a high-altitude location (almost 2,800 meters above sea level); though alcohol addiction may have contributed, the authors hypothesized that high altitude was the main contributing factor.30

A similar case was described by Lu, et al in 2015, wherein a 60-year-old otherwise healthy woman was diagnosed with CSDH after ascending a 4,400 meters on a plateau four weeks earlier.31 Hypoxia, which occurs at high altitude, results in markedly increased cerebral blood flow and cerebral venous pressure, with potential for bridging veins to bleed. Research into the physiologic changes at high altitude support this notion, including imaging studies which show marked distention of cerebral veins with hypoxia and dilation of retinal veins at high altitude.31 Missori, et al studied eight patients with spontaneous nontraumatic CSDH; all eight had evidence of increased cerebral venous pressures using venous angiography and magnetic resonance venography.32

Based on the relatively large number of CSDH cases in which the precipitating etiology is never discovered,1,3 it’s conceivable that some “less common” etiologies actually account for a higher percentage than the literature suggests.

An Unusual Etiology of Chronic Subdural Hematoma: Case Report and Review of the Literature
Share this !