Topical TXA Is as Effective as Merocel in Stopping Anterior Epistaxis

Key point: Atomized TXA with nasal compression is as effective as Merocel in stopping anterior epistaxis with decreased rebleeding rates and should be considered as a more comfortable alternative to nasal packing.

Relevance: Anterior epistaxis is a frequent presentation in the acute care setting and anterior nasal packing is a common way to manage it. However, packing causes discomfort to patients during placement and can also result in infection, tissue necrosis, and rebleeding after removal.

Key point: Irrigation with 20 minutes of cool running water within 3 hours of injury is associated with reduced need for skin grafting and burn severity in pediatric burns.

Relevance: First aid guidelines recommend irrigation of burns with cool running water but alternatives such as still water, ice, and aloe vera, are still being used. Though there is no evidence of efficacy of these alternatives, water first aid has been associated with reduced infection, scarring, and mortality in burns. However, no clear association between adequate first aid and improvement in outcomes in pediatric burns has been established.

Study Summary: To address the question, the authors used multivariate regression models to evaluate the relationship between adequate first aid (20 minutes of cool running water within 3 hours of injury) and need for skin grafting in 2,495 children. Ultimately, 9.5% of children required grafting. In the group that received adequate first aid, the odds of requiring a graft were significantly decreased [OR 0.6]. In addition, adequate first aid was associated with decrease in full-thickness depth as well as hospital admission. Of note, 90% of children received first aid with running water but only about 70% were given the adequate duration. Irrigation of any length was associated with decreased likelihood of requiring a graft but there was a dose-response relationship with adequate first aid leading to the greatest decrease.

Key point: The analgesic ceiling dose of ibuprofen of 400 mg/dose is appropriate for short-term pain relief, as higher doses do not result in greater analgesia.

Relevance: Ibuprofen is one of the most commonly prescribed analgesics in the acute care setting. The analgesic ceiling dose of ibuprofen is 400 mg/dose with a recommended 1,200 mg/day. However, the FDA approved and commonly prescribed dose is 400 mg–800 mg/dose with maximum 2,400 mg/day. This is of concern as the renal and gastrointestinal side effects of NSAIDs are dose-dependent.

Study Summary: The authors hypothesized that that there would be no significant difference in analgesia achieved by 400 mg, 600 mg, or 800 mg doses of ibuprofen. In this randomized, double-blind trial of equivalency, 225 adult patients presenting with acute pain were allocated to three groups receiving the different doses. Then, their pain levels were assessed on a 0–10 numeric rating scale before and 60 minutes after drug administration. The average improvement in pain score from baseline to 60 minutes after drug administration was approximately 2 rating points for each dose. In addition, there was no statistically or clinically significant difference between pain scores across the three doses at baseline or at 60 minutes.

Over 80% of Our Patients Do Not Know What Fracture Means

Key point: Providers tend to overestimate the patient population’s health literacy level. It is critical that we use patient-friendly language during shared discussion.

Relevance: Effective communication is the cornerstone of medicine and is closely linked to patient and provider satisfaction. Unfortunately, medical terminology is difficult for the average person to understand. Lack of understanding may lead to noncompliance and compromise the patient-doctor relationship. It is therefore important for providers to be aware of the average patient population’s health literacy level.

Study Summary: The authors explore patients’ knowledge of orthopedic words that are commonly used in the acute care setting with the assumption of patient understanding. One hundred fifty ED patients were given 11 multiple choice questions to answer. Here are the results:

Given that the “assumption of patient understanding” referenced above can now be presumed to be incorrect for many patients, it may be advisable to provide a brief, patient-friendly explanation of clinical terms.

Key point: There are numerous adverse drug reactions to tramadol, which now include hypoglycemia associated with seizures and hypoglycemic coma.

significant association of hypoglycemia with tramadol and methadone in contrast

Relevance: Tramadol is an opioid analgesic commonly prescribed due to its relatively low risk of respiratory depression. In recent years, prescriptions for tramadol as well as adverse drug reactions have nearly doubled, prompting the DEA to recategorize tramadol from a schedule V to schedule IV drug. Common to all opioids, adverse drug reactions to tramadol include nausea, constipation, and dizziness. In addition, several case reports have described tramadol-induced hypoglycemia (glucose <70 mg/dL), which was investigated in this article.

Study Summary: The authors assessed over 12 million adverse drug reaction reports from the United States FDA Adverse Event Reporting System and analyzed 145,404 reports in which patients were receiving monotherapy. Tramadol works through several mechanisms: inhibition of serotonin and norepinephrine uptake, inhibition of NMDA receptors, and as an agonist to the µ-opioid receptor. They found that compared to four SNRIs, five drugs with NMDAR activity, and 10 other opioids, tramadol had a significantly higher frequency of hypoglycemic events with reported odds ratios >10. Top adverse events associated with hypoglycemia included seizures and hypoglycemic coma.

Recurrent Febrile Seizures Are Associated with Increased Morbidity and Mortality

Key point: Approximately 1 out of 4 children will have a second febrile seizure. Recurrent febrile seizures are associated with increased risk of epilepsy and psychiatric disorders.

Relevance: Approximately 5% of children ages 6 months to 5 years experience at least one febrile seizure, so it is important to be able to educate families regarding prognosis. 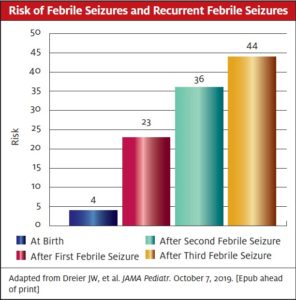