Urgent care has flourished because of its defining attribute of providing high-quality, walk-in care more efficiently and less expensively than the emergency room offers. Yet, we continue to read articles in the mainstream media saying that so many people still flock to the ED with relatively minor complaints that during high-volume periods (like flu season), hospital and local health officials practically beg them to go to an urgent care center instead.

The question of why that is continues to be unanswered. However, it becomes more and more clear as time goes on that the more people go to the ED when they don’t really need to, the more money is wasted. UnitedHealth Group—which, as a managed care organization, has a vested interest in this area—published data quantifying just how much, based on the costs associated with 10 common primary care-treatable complaints presenting to the ED. Based on that, they determined that 58% of all ED visits (roughly 18 million out of 27 million) could be safely treated in an urgent care center.

See below for the eye-opening specifics. 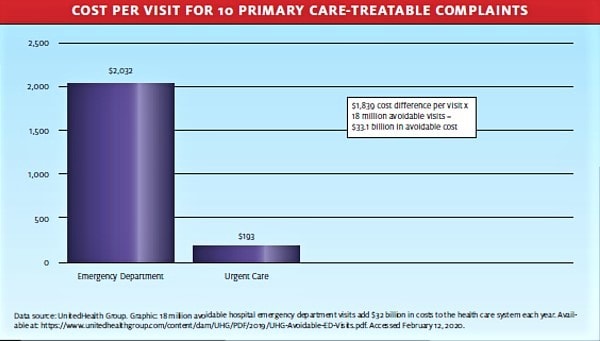 Thirty-Three Billion Reasons Patients Should Be Heading to Urgent Care Instead of the ED
Share this !