Past issues of JUCM have covered the various “axes of workplace evils” including workplace bullying,1 sexual harassment,2 and toxic gossip.3 Not to be mistaken for crude schoolyard behavior, at the heart of these very serious workplace dysfunctions is one person trying to gain an advantage by exerting power over someone else. The impact of which goes far beyond hurt feelings but rather, results in demoralized workplace cultures, lost business opportunities, even legal liability for leaders and organizations.

In psychology, the term gaslighting describes when someone is being manipulated to doubt their own sanity or start to believe they’re no longer a good judge of their own memory, feelings, experiences, or logic. The term comes from a 1944 motion picture of the same title about a husband who drove his wife insane by causing her to constantly question her own reality.

In the workplace, gaslighting manifests in interpersonal communication. For example, a nurse brings a legitimate concern to the medical director in a sincere attempt to improve patient safety but the physician snaps back, That’s none of your business…, The real problem is…, or You’re just jealous of…—all responses which diminish the employee’s concerns, dismiss the employee’s motives as petty, and avoid addressing the real issues at hand. When gaslighting occurs, the organization gets deprived of employee engagement and continual improvement for the sake of maintaining the status quo and the gaslighter’s sense of power.

Gaslighting tactics are used to manipulate someone else by instilling self-doubt. Like workplace bullying, sexual harassment, and toxic talk, gaslighting is ultimately about exerting power and control over a victim. While often mentioned in the context of narcissism, gaslighting differs from narcissism in that gaslighting is not a personality disorder (see Exhibit 1)) but rather describes the tactics used by narcissists and others to manipulate people. While gaslighters are often portrayed as insecure in their ability to lead or convince people in factual terms, a growing body of research indicates that many gaslighters simply find pleasure in controlling others.5 Or more simply, some gaslighters are pathological but many others are just “jerks.”

When gaslighting occurs, victims are left feeling uncertain and insecure and some even have difficulty ascertaining that they’re in a gaslighting situation. In extreme cases a co-dependency develops between the gaslighter and victim in which the victim, deprived of self-confidence and trusting in the gaslighter’s position of authority, doubts his/her own ability to be successful apart from the gaslighter while the gaslighter continues to shape the victim’s sense of reality. For example, a victim who has internalized the gaslighter’s abuse will remain loyal because they believe they are incapable of doing better and undeserving of being happier, in a different environment. This end effect has been compared to brainwashing, cults, and totalitarian propaganda all designed to disempower people.6 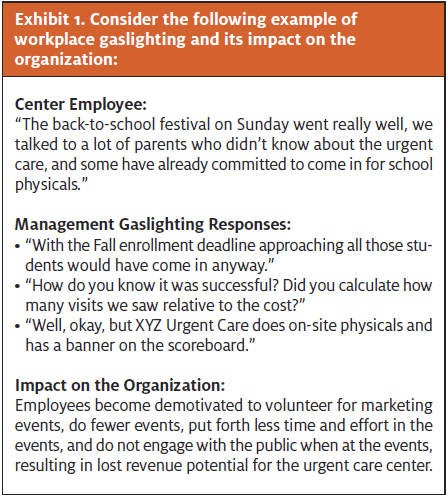 The tragedy in organizations is that everyone on a team is successful to the extent that they’re aligned around a common set of values—which in urgent care should involve safe, quality, efficient care and a positive patient experience—and organizations should value a diverse and dynamic workforce to bring new ideas to the table for continual improvement—but in the end, gaslighting undermines the success of everyone on the team, including the gaslighter him/herself.

The ultimate victim of gaslighting behavior is therefore the organization and everyone associated with it. That’s why it’s incumbent upon management teams, including human resources leaders, to bring awareness of gaslighting as part of an overall program that addresses all workplace toxicity, including workplace bullying, sexual harassment, and toxic gossip. This starts with understanding and recognizing gaslighting behaviors.

Gaslighting manifests in behaviors that either create or leverage an unequal power relationship to constantly put the victim “in their place.” Gaslighting tactics that diminish the importance of what an employee or co-worker is saying include:

When interacting interpersonally, the gaslighter will often cross the line between what’s appropriate discussion in the workplace and making backhanded comments about the victim’s flaws, insecurities, appearance, education, values, religion, personality, family, hobbies and other subjects that by all social norms are considered taboo in a professional setting. Ignoring commonly accepted social boundaries implies privilege and entitlement while dehumanizing the victim by denying their rights to privacy and personhood.7

Other gaslighting techniques to dominate a conversation and maintain control of the dialogue include:

When looking at facts, such as business statistics or financial results, a gaslighter will give a different interpretation that fits their needs, often in sharp contrast to what is obviously in front of everyone. When the gaslighter is the boss, people are forced to accept this “alternative reality” as ultimately gaslighting techniques are intended to confuse, disorient, frustrate, and distract individuals from the real issues at hand.

When working in teams, a gaslighter will pit team members against one another by selectively offering isolated compliments and praise, which can provoke team members to one-up each other rather than collaborating. The situation is made worse when some team members are not held accountable to the same standards. There are often one or two “protected” people (ie, those loyal to the gaslighter) that others are constantly compared to (ie, “Why can’t you do it more like Emily?”) even if those individuals appear to everyone else to have obvious shortcomings or are experiencing their own gaslighting by the perpetrator. While the gaslighter may see this comparison and competition as a form of “motivation,” it actually cements an unequal power structure and distrust among team members. Gaslighters are innately poor team members because they view relationships as competitive rather than collaborative, always with one person on top and one on the bottom.7

How to Respond to Gaslighting

An employee should never be afraid of their boss. Rather, the workplace should empower employees to honestly and openly share ideas, suggestions, fears, and worries about their jobs without punishment. If an employee decides to stay in a job where they’ve experienced gaslighting, they must put greater trust in their gut or instinct, remembering every time they felt insecure about their job it was due to the gaslighting as opposed to being bad at their job. It’s important for employees to be certain in their memory and experiences, even maintaining a diary for backup, so when they have to stand up to the gaslighter, they can confidently say “No, that’s not what happened, here are the facts….”

When appropriate, an employee can engage human resources, although HR departments are often ill-prepared to identify the underlying issue and frequently get caught up in he said/she said. To prevent HR from co-opting with the gaslighter in “blaming the victim,” a level of confidentiality should be agreed upon prior to getting into specifics. Because gaslighters absolutely hate being found out and thus losing control, HR action against the gaslighter may be met with a punitive response. The sad reality is the employee may have to choose between their integrity, their income, and enduring continued gaslighting.

Like standing up to a bully, a victim who attempts to stand up to a gaslighter will likely face subtle “punishments” long after the conversation has ended. Victims will feel silly, stupid, incompetent, always in the wrong, and like they cannot recall what was said in meetings. To compensate for these feelings, victims frequently apologize, make self-deprecating comments, or over-work to prove a point or regain the boss’s trust.

Gaslighters have been known to even disparage the victim’s reputation to others while pretending to be concerned (ie, “I’ve noticed Jenny has been having a tough time managing all the changes”), which results in others innocently co-opting with the gaslighter to perpetuate the manipulation.

When the repeated use of gaslighting tactics drives an otherwise loyal, hardworking employee to their emotional limits, the gaslighter then hits below the belt by trivializing the victim’s entire human experience:

These final responses are why gaslighting is ultimately defined as making one question their own sanity. One cannot endure gaslighting over long periods of time without it profoundly affecting who they believe they are. Unfortunately, if the business isn’t going to take it seriously, and if the boss isn’t going to change, the employee may just have to go elsewhere.

Another outcome when gaslighting behaviors are called out, which rarely occurs when the gaslighter is the boss, is the perpetrator might do a full 180 and pour on the charm, including feigning compliments. This “love bombing” keeps victims constantly hoping for a positive outcome. It shows them that things aren’t all bad and that they can stick things out for another day.8

End of the day, nobody has the right to manipulate anyone, in any way, regardless of the cause. Being the boss is inherent control and power in the workplace but for some people, that’s not enough if they don’t have total control and power. The ideal workplace is one in which diverse team members can bring their authentic selves, collaborate honestly and openly towards a shared goal, make ethical decisions with personal integrity, and feel good when celebrating workplace wins. When it comes to gaslighting there are no perfect answers, but it is critical to recognize the toxic behavior, maintain a strong sense of self, and remain confident in value you bring to the company every day. 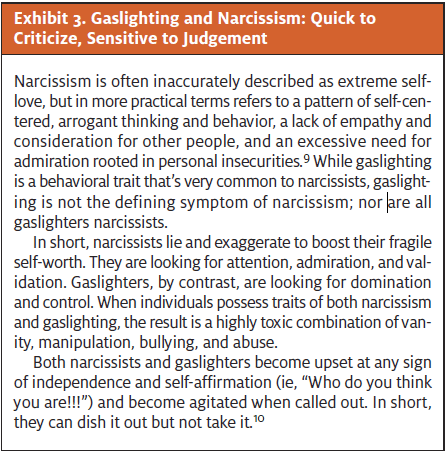 Citation: Ayers A. That’s not what happened! how to deal with gaslighting in the workplace. J Urgent Care Med. July-August 2020. Available at: https://www.jucm.com/thats-not-what-happened-how-to-deal-with-gaslighting-in-the-workplace/.

That’s Not What Happened! How to Deal with Gaslighting in the Workplace

President of Experity Networks and is Practice Management Editor of The Journal of Urgent Care Medicine
Share this !