Q: While reviewing charts where incision and drainage (I&D) procedures were being performed, I came across instances where Current Procedural Terminology (CPT) code 10060, “Incision and drainage of abscess (eg, carbuncle, suppurative hidradenitis, cutaneous or subcutaneous abscess, cyst, furuncle, or paronychia); simple or single” was billed for treatment of an abscess on the finger. I believe this is an error, since this procedure involved an abscess of the finger pad and not just paronychia. Can you explain the different I&D procedures please?

Treatment for paronychia using a simple incision just below the skin’s surface (and documented as such) would be billed correctly using CPT code 10060. However, if the patient had an abscess on the finger requiring a deeper incision into the superficial subcutaneous tissue of the finger, then the documentation should reflect that, and the biller should use CPT code 26010 on the claim.

Key points to correct coding I&D procedures in general depend on the site, identifying the abscess, cyst, hematoma, or seroma, and whether the procedure is simple or complicated. The last part of the definition, simple or complicated, is probably the most difficult to determine since the CPT descriptions are somewhat vague.

A simple I&D includes drainage of the pus or purulence from the cyst or abscess. The incision is left open to drain on its own, allowing for healing with normal wound care. A complex I&D is generally defined as an abscess requiring placement of a drainage tube, allowing continuous drainage, or packing to facilitate healing.

As a physician, it is important that you document precisely, notating the simplicity or complexity of the procedure, as well as how deep the incision(s) is. For example, a patient presents with a large but superficial abscess on the arm that is easy to reach. After the patient was appropriately prepped and anesthetized, an incision was made just under the skin and the pus drained. Packing was placed in the wound, and the patient instructed to return in 2 days for repacking.

In this case, the correct code is 10061, “Incision and drainage of abscess (eg, carbuncle, suppurative hidradenitis, cutaneous or subcutaneous abscess, cyst, furuncle, or paronychia); complicated or multiple” because packing the wound adds complexity.

Table 1 addresses I&D procedures with average reimbursement rates that are worthy of discussion with fellow physicians to demonstrate how imperative it is for the documentation to reflect the procedure exactly as it was performed, and with coders so that they are aware of the numerous I&D codes available. 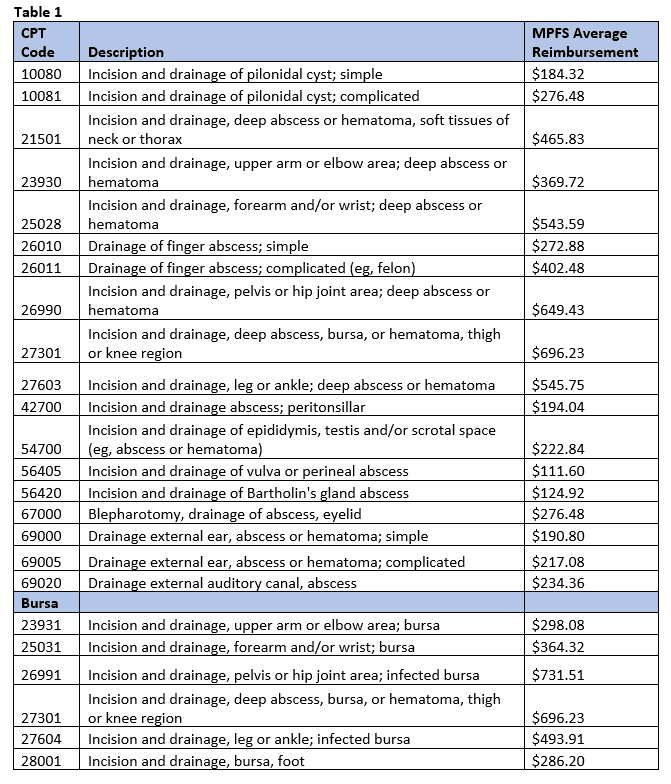 The procedures above require that documentation indicates the abscess, hematoma, or seroma is deep in order to bill for the procedure. The site of the affected area, method of incision, as well as the depth, width, and length of the incision will direct the coder to the correct code. When the problem is more superficial, the following procedures might be more appropriate:

As you can see, the correct documentation can make a huge difference in your reimbursement. Continue to review the documentation and claims billed in order to ensure you are coding appropriately for the work that is being performed.

Small Errors Could Cost Big Bucks When Billing for I&D
Share this !