Urgent message: Appropriate treatment of “trigger finger” in the urgent care setting starts with differentiating that diagnoses from other disorders of the hand. This is relatively straightforward if one finger is involved, but can become more complex with multiple digits.

Trigger finger, also known as stenosing flexor tenosynovitis, is a common hand disorder that affects approximately 2.6% of the general population during their lifetime.1 For diabetics, the risk of developing trigger finger approaches 4% to 10%, with more complicated presentations involving multiple fingers.1 In the urgent care setting, differentiating trigger finger from other disorders of the hand and evaluating its severity is crucial to making treatment decisions.

The pathological process required to create trigger finger involves thickening of the first digital, annular (A1) retinaculum that serves as a pulley sheath along the metacarpophalangeal (MCP) joint. With annular narrowing, the digital flexor tendon loses the ability to relax following flexion, resulting in a “triggered finger.” Possible etiologies responsible for fibrosis of the the A1 retinaculum include diabetes mellitus (DM), amyloidosis, repetitive hand motions, and carpal tunnel release (CTR); however, in most patients the cause is often idiopathic.2-4 A recent review has postulated that viewing CTR as a cause of trigger finger may actually be the result of a publication bias.4 It is also important to note that stenosing flexor tenosynovitis is not an inflammatory process, despite the misnomer.2,5

Establishing a diagnosis of trigger finger can be relatively simple if one digit is involved, but may require some thought if it involves more than one digit (see Figure 1). 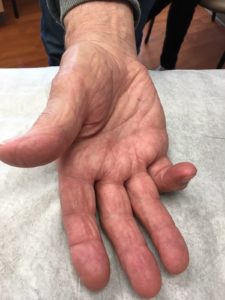 Figure 1. An 80-year-old, nondiabetic presents with trigger finger in the fifth digit.

A patient complaining of trigger finger will present with a finger in passive flexion that can be passively, but not actively, extended. As the finger is flexed, a “locking” of the finger, catching, or snapping sound at the MCP joint may be appreciated. Pain is also noted only on the palmar aspect of the MCP joint and may radiate into the palm; however, no erythema is usually appreciable. Painful nodules of the palm may additionally be seen with trigger finger. Dupuytren’s contracture frequently presents with many similarities, but can be differentiated from trigger finger by its inability to passively extend the finger(s) and painless palmar nodules.

Once the diagnosis of trigger finger has been made, a determination of its severity and duration are required before directing treatment. Ask the patient about the frequency with which they experience locking of the finger, how long the symptoms have persisted, the amount of pain they experience, and range of motion with the digit.

Symptoms of trigger finger lasting longer than 3 months are classified as chronic and should be considered more severe.5 Patients exhibiting a snapping sensation of the finger are considered to have the mildest presentation compared with those unable to unlock their finger.

Three methods of treatment have been studied and confirmed to aid in the relief of trigger finger.

The first involves placing the triggered finger in a splint (orthrosis) with the MCP joint in 0o position for 3-6 weeks with >18 hours per day wear time.5 This is the least invasive treatment option and should be used for patients with mild pain and severity of locking. Modest symptom relief is reported in 46% of patients; complete relief is seen in 31% of patients with compliant orthosis utilization.5 Naproxen and other NSAIDs may be combined with arthroses to alleviate pain symptoms, but by themselves have not been shown to alleviate trigger finger symptoms.

The second treatment option for trigger finger is an immediate-acting steroid injection combined with a local anesthetic. This option may be exercised as a first-line treatment for patients presenting with chronic trigger finger, inability to unlock the finger, or significant disability.1,3,5 Most patients should report some improvement over the first 4 weeks from time of injection. Complete resolution of trigger finger occurs in 57% of patients after the first injection and 86% of patients following a second injection.5 Current recommendations discourage more than three injections. Utilizing orthoses with injection may also be utilized, but no randomized controlled data have been reported to show improved cure rates. Steroid injections are not meant to act as an anti-inflammatory, and their mechanism of efficacy is unknown.2,5 Use in diabetic patients should be at the discretion of the provider; however, efficacy has been shown to be lower in achieving cure than in nondiabetics.6

The third and most definitive treatment option for trigger finger is surgery. Referral to an orthopedic hand specialist is recommended for patients with severe features that decline or fail steroid injection. Diabetic patients with multiple finger involvement or for whom steroids are deemed inappropriate should also be referred for surgical consultation.6,7 Currently, debate exists between percutaneous and open surgical approaches. A percutaneous approach allows a patient to mobilize their finger within hours after surgery, can be done in an office setting, and requires less healing time. This technique has an increased theoretical risk of nerve damage to the finger, but has been recently minimized with ultrasound guidance.8 A study comparing complication rates between percutaneous and open approaches showed equivalent risks and success rates.9 Despite this study, open surgical approach is still the preferred method among surgeons. Recovery time for open surgery is 2 to 3 weeks on average.8 Successful cure rates for trigger finger following a meta-analysis with 2-6 month follow-up are 99.44% and 99.45% for percutaneous and open surgical approaches, respectively.9 Addition of a steroid injection at the time of surgery has not shown to be of any increased treatment benefit.9 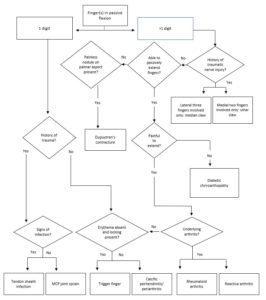 Figure 2. Flow chart for determining the diagnosis of a hand disorder resulting in passive flexion of a digit or digits.

Evaluation and Diagnosis of Trigger Finger with Current Management Strategies

Professor at Creighton University Medical School, Editorial Board Member at The Journal of Urgent Care Medicine
Share this !