Urgent message: The idea of a “typical” urgent care operation buyer is evolving along with the industry. While private equity has been an essential player in market growth, healthcare organizations with longer-term vision are now more commonly involved in acquisitions.

It’s no secret private equity (PE) has a played a paramount role in the design, development, and growth of the urgent care industry. Collectively, these firms have invested billions of dollars to create the level of awareness, acceptance, and reliability that is enjoyed by patients across the country.

In the industry’s pioneer period, urgent care chain transactions among private equity companies were commonplace. Since PE firms typically operate under 3- to 6-year investment time horizons, it is inevitable that many of these urgent care chains have and will continue to be sold. Today, we find evidence that urgent care chains are increasingly acquired by health systems, managed care organizations, and existing PE-backed portfolio companies (ie, market consolidators). These new buyers are expected to have possibly longer investment horizons and varying transaction motivations.

Table 1 illustrates the prevalence of transactions among PE firms earlier in the decade. These firms have generally held their investments for 3-6 years and sought 20%–30% annual investment returns that were largely achieved by expanding the size, scale, and penetration of their urgent care chain. While not all-inclusive, there are currently seven urgent care chains held by a PE firm that could be for sale in the short-term based on this average historical hold period. 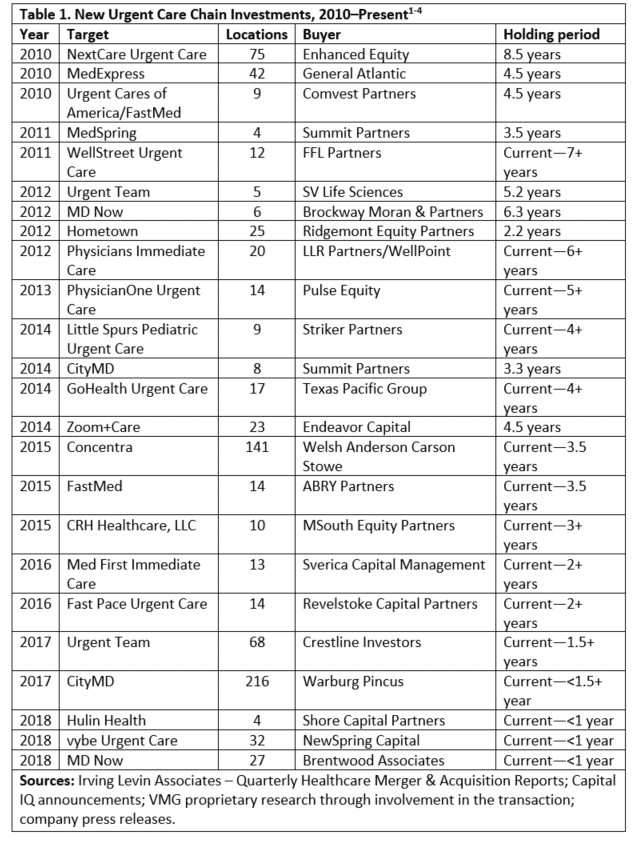 As the industry matures, achieving above-average investment gains by opening new clinics can be difficult. Already some markets are highly competitive and appear to be oversaturated with urgent care centers. In these areas, market participants have complained that de novo (ie, new clinic) volumes are not ramping up as expected, and volumes in established clinics are declining. One market participant in a large city recently commented, “This market is at a shake-out point.” This has led some PE firms to shift their investment strategy, whereby more reliance is placed on acquisitions or consolidations to expand an existing footprint. Table 2 outlines major transactions where urgent care chains were acquired by existing PE-backed urgent care chains.

The introduction of payers and providers as a new buyer class (“end users”) accelerated in the latter half of the decade. Previously, payers and providers were monitoring the industry to determine whether urgent care would prove to be a viable new care delivery model. Many health systems started to recognize urgent care as an important access point for patients and a way to gain more integrated exposure to the market. The data in Table 3 outline the identified major payer and provider transactions. The number of transactions involving this group increased from three major transactions prior to 2014 to eight major transactions after 2014. 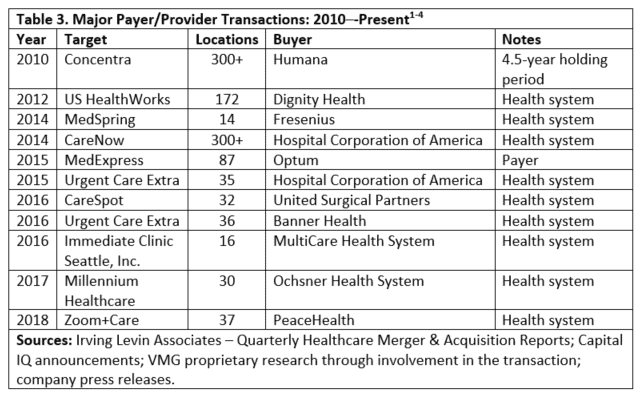 Figure 1 summarizes urgent care chain transactions by buyer type. While PE buyers are expected to remain active in the market, clearly there has been a shift toward market consolidators, health systems, and payers. 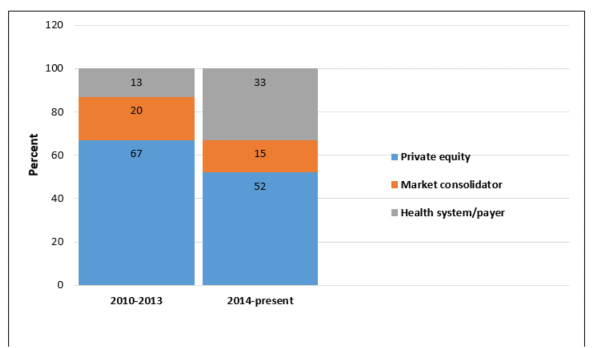 Of particular note to current owners of urgent care operators, the introduction of a new emerging buyer class (namely, payer/providers and market consolidators) may have valuation implications. When there is significant growth opportunity, valuations are directionally higher; the buyer is less concerned with how the operations look today (ie, less focus on current profits or operating risks) and more concerned with what the company could become (ie, the ability to leverage the existing platform to achieve growth). If an investment horizon approaches before expected profits are realized, the seller seeks another growth-focused buyer who will appreciate and continue to invest in the company’s growth story. This has historically been the “market developer” or PE-to-PE transaction narrative.

Alternatively, when there is less perceived opportunity for growth, valuations are directionally lower. The buyer becomes more concerned with what the organization looks like today (ie, current profits, operating risks, and integration) and less concerned with the ability to leverage the existing platform. End users typically match this buyer profile.

Real differences between urgent care chains and investment strategies are starting to emerge, where some chains have noticeably better prospects than others. As the urgent care industry matures, competition and market saturation may limit the opportunity for de novo growth to fuel expansion. Existing portfolio chains may be pursing expansion via consolidation or acquisition in certain markets. At the same time, health systems and payers that have been behind the curve are becoming a more represented buyer at auction. Substantially different offers for the same urgent care chains have already been observed, depending on the buyer. For these reasons, the next possible wave of urgent care transactions will likely be diverse mix of buyers with different motivations and outlooks for the same enterprises.

End Users and Consolidators: The Next Possible Wave of Transactions in Urgent Care
Share this !