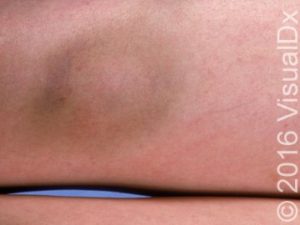 The correct diagnosis is autoerythrocyte sensitization, also known as Gardner-Diamond syndrome or psychogenic purpura. This disorder is characterized by bruising without clear precipitating causes or definite trauma.

Pearls for Urgent Care Management and Considerations for Transfer

A Teenage Girl Who Suddenly Bruises Easily
Share this !
1 2