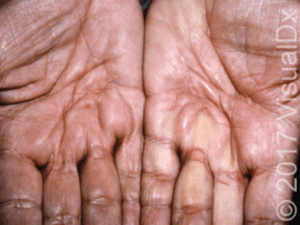 This patient was diagnosed with Dupuytren’s contracture, a fibroproliferative condition involving the palmar aponeurosis. At present, the pathophysiology of the disorder is not entirely understood, although several factors are believed to contribute to fibroblastic proliferation and altered collagen profiles, including specific platelet-derived fibroblast growth and transforming growth factors. White men of northern or eastern European descent aged 60 years or older are most commonly affected.

Pearls for Urgent Care Management and Considerations for Transfer